Why I Love Volleyball

Its always darkest before the dawn.  You're always drunkest before you pass out.  The desert is always sandiest before a town.  Wise sayings, even the ones I made up.
I spoke the other day of death in the desert, but more emblematic is the lack of life altogether.  The first six miles were the bleakest I have ever seen, even the ubiquitous sagebrush having fled.  This was blighted and bereft land.
The life quashing came courtesy of salt, which infiltrated the soil.  No organisms of any size could be supported.  The coyote tracks quietly communicated with me, "I'm just passing through, nothing to see, nothing to eat."  The finality of Carthage's punishment lay before me and underneath, crackling beneath my feet.
Slowly the salinity diminished, the ground turning to soft sand.  I was reminded of the edge of high tide on a Carolina beach, the spot where lapping waves kiss before retreat, leaving a spongy, but not muddy surface.
Eventually the sagebrush returned, lizards, squirrels, and jackrabbits as well.  There was life in the blue sky above as well.  More jets, considerately not bombing me on this occasion. They zipped across the air, rolling, diving, a ballet performed on  high.  These are the best pilots in the Navy.  Fallon, I may have failed to mention, is the home of the Top Gun School, which moved here from Miramar in 1996. 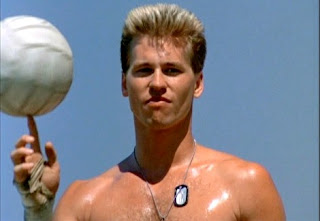 We all know the movie, Maverick buzzing the tower, Goose kicking the bucket, Iceman acting all douchy, and the whole gang playing some seriously homoerotic volleyball.  They may allegedly be fictional characters, but the contrails filling the sky like the hyperactive drawings of a spastic with an Etch-a-Sketch are real.
Lower flyers brought more omens of California.  I saw egrets and sea gulls for the first time in ages.  The Pacific becomes more of a reality each day.  My afternoon arrival in Fallon meant I was twenty two miles closer.