Armed with a new baby jogger, but still without an infant, I set off towards Milford in pursuit of Gil Thorp.  I had no plans to capture the legendary high school coach today because of the small mountain range he had fiendishly put in my path.
The Mineral Mountains are stumpy midgets compared to the Rockies, but a 1500 foot elevation change will at least get the heart racing.  Everyone except those who like death-defying drama will be glad to know the planned route is simple.  Take Utah 21 to the Pass Road.  Follow the Pass Road west until you run into 21 again.  Turn right!  Otherwise I may find myself back in Beaver which would be ironic considering how much trouble I had finding it in the first place.
I didn't screw up the first part, reaching the Pass Road by mid-morning.  The name sounds daunting as did a sign a quarter of a mile in warning the surface was damaged for the next twenty five miles.  The ADT directions list the Pass as eighteen and a half miles in length and Google maps agreed, which begs a question.  How bad a shape are the six miles which don't exist? 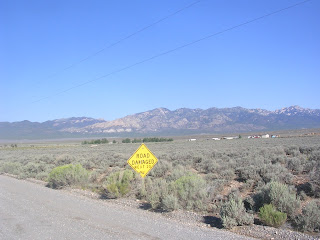 In reality I had smooth sailing up a gentle slope.  There was only one obvious bit of damage, a permanent washout filled with thick flowing mud.  My shoes were coated in the cement-colored gunk, but that was the limit of the damage.
A bucolic stream accompanied me, then was replaced as eye candy by a series of boulders set upright, looking like horror movie hands, reaching up out of the grave, trying in vain to grab the legs of the blonde who so foolishly relinquished her virginity in Scene V.
I gained the apex at Soldier Pass and before two and began the descent.  A few hours later I could see the valley, with Milford front and center.  The sun was hovering slightly above the Frisco chain in the west so I crawled into the woods and found a comfy location next to what turned out to be a national fly and ant convention.  I would have been better off getting a hotel room next to a bachelorette party.  At least I might have received a penis-shaped pencil to go with my night of zero sleep.