Fallon is not a very old town, even for Nevada, coming into existence around the turn of the 20th century.  The wooden monumental courthouse, constructed in 1903, is perhaps the only situation of historical interest.  There are no major attractions, just a few rundown casinos, lying mostly empty with a handful of weary and bleary old gamblers going through the motions.
As a result, "Top Gun" receives top billing.  Half the businesses in town were riding along on the coattails.  The Top Gun Dragway, Top Gun Wings, and the Top Gun Carwash.  The last was my favorite.  Do they use a jet turbine in the drying process?  Your car has never been cleaner.  Alas, the engine has been melted.
Miners and speculators traveled these deserts fifty years before Fallon appeared, making their way to the California gold fields and later Virginia City.  An oasis known as Ragtown popped up to meet their needs.  About six miles west of Fallon's current location, Ragtown's main purpose was quenching thirsts.  Arrivals would have just crossed the Forty Mile Desert and they and their animals were generally a mite parched at this point. 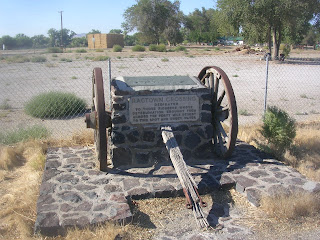 Mark Twain rode through while riding cross country.  He had little to say about the place, noting in his book "Roughing It," "On the western verge of the Desert we halted a moment at Ragtown. It consisted of one log house and is not set down on the map."
I was riding on fumes myself, the long miles in recent days finally taking a toll.  My left foot throbbed all day and by early afternoon I thought about little except how great a nap would be.  I want to burn through U.S. 50, but there is no purpose in it if I can't physically handle California afterward.
Therefore I decided to end a bit earlier than usual, halting at the Lahontan Reservoir.  The lake is part of the Carson and Truckee Irrigation Project, without which Western Nevada would be nearly uninhabitable and certainly not so well-populated.  The U.S. government's Bureau of Land Reclamation began the project in 1903, building three dams and a canal on the Carson and Truckee Rivers.
Lahontan lay half-empty, another victim of the poor snows this winter.  If these precipitation trends continue I wonder what the future holds for Fallon, Reno, Carson City and other cities dependent on the reservoirs for survival.