The Land of Death

Much of what I see in the desert is death. Little can live on the few drops of water in the rare stream and hidden streams. Those animals that do face other perils. The coyotes often wail in the distance, the bane of the pronghorn and the jackrabbit. Predators are not immune from danger either. One of their number lay astride the highway, done in by a killing machine of man's design. A thin strip of metal on the device read Acme XYY. Wile e would appreciate the irony for certain.
Man's doom lies along the highway too. Rarely have I navigated a valley without coming upon a memorial for one deceased driver and usually there are more. The attention wanders, consciousness fades from ennui, never returning. The urge to speed is overwhelming, nothing to gawk at, few other autos to block progress. Why not a snort of whiskey to relax and take the mind off the long journey? These thoughts for many are their last.
I have been grateful to have Dad looking out for me in this hard land and now another has my back as well. Today I had the honor of meeting Officer Brown, a Nevada State Trooper and Army veteran. He assured me law enforcement would keep me safe and passed along a token to thank me for my efforts, a Nevada Highway Patrol Commemorative Coin, colored blue, red, and gold. I have received few souvenirs on this long trip I will value more highly. 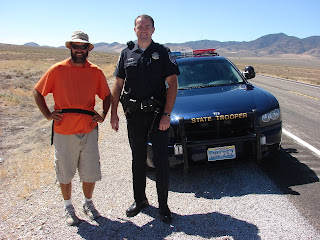 An otherwise quiet walk led me to a small outpost of humanity in the bleakness of Central Nevada. Cold Springs, not to be confused with the suburb of Reno, has a total residency in the single digits. A cafe, small hotel, and RV Park make up the sum of the settlement. I was thankful for a hot meal, a soft bed, but most of all that I had survived another day in the land of death.