I spent the early morning hours exploring Georgetown.  Originally settled by hordes in search of gold, those seeking riches here had to settle for second prize, a huge cache of silver.
A narrow gauge railroad was constructed on the heights between Georgetown and her sister city of Silver Plume to shuttle the ore down from the mountains.  The mines have dried up, but the train still runs, now a major tourist attraction. In fact, Georgetown is quite proud of her past.  Many examples of 19th century architecture such as the Hotel Du Paris and the fire station have been preserved to look much as they did during the boom.
Alas my plans to ride the lode train were derailed when I reached the ticket office and found the doors locked.  Non-plussed I decided to move uphill without motorized assistance.
On the agenda was the most difficult climb of the trip.  My destination was Argentine Pass, the highest point of the ADT at 13,200 feet.  I stood only 8,500 feet above sea level at that particular moment.
I started heavenwards on Guanella Pass, enjoying a couple miles of paved road before running into FR-248.  Here I entered ATV and 4x4 territory for six miles, gaining more elevation with each minute spent on the rugged road.  Eventually the oxygen thinned and I had to rest every half an hour to regain my breath.
By three I reached a confusing crossroads.  One path led to the pass itself, the others to the land of the lost.  The driver of a Ford Bronco making the arduous journey stopped to help me.  We used his GPS to determine the right way and to discover the current elevation - 11,600 feet.  As tired as I was there were still 1600 vertical feet to the summit.
At this point my gait was clumsy, I stumbled forward more than walked.  I'd never hiked at anywhere near such heights.  Each footfall was slow and calculated.  I inhaled deeply to get as much air as possible.  I guzzled water to stay hydrated.  I feared a violent headache from the altitude.
My condition was even worse by 12,500 feet.  Have you ever seen videos of hikers on Mount Everest?  They seem to pause between every step, each inch of progress a trial.  I felt like this as I neared the top.  I wanted to run, to finish this agonizing struggle in a few strides and scream in triumph, but the body was unwilling, I merely trudged. 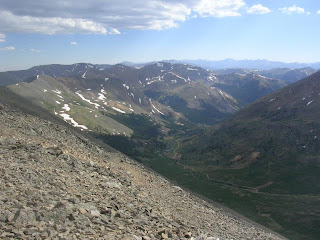 Eventually I arrived, but there was little time to celebrate the near five thousand foot ascent.  The day was growing late and I had to get down.  The descent, on a barely visible goat track covered with the remains of a rock slide or five hundred, was not much easier.  The surface provided little purchase.  I lost balance on numerous occasions and fell once, luckily on a rare patch of dirt.  The penalty for a misstep to the right was a two thousand foot plunge to the valley below.  I wished for once my pack was even heavier - because it contained a parachute.  After an hour and a half negotiating the minefield I reached a grassy area, set up, and spent twelve hours unable to move.