The long stay with Rob, Kimmy, Emily, and Anne has come to an end.  I returned to the state of alone upon leaving the Wilsons Sunday morning.  No host on the entire trip has tolerated my presence so long or ferried me so far to the trail.
Again I would climb.  The first section, from Keystone to Bergen Park was a gradual increase in elevation, slowly reaching the height of Mt. Falcon from yesterday.  Following lunch in Bergen Park the work became more intense.  Squaw Pass led me up 2,000 vertical feet up windy road with little shoulder.  Cars and bikes flew down and struggled up on either side, giving me little room for error.  The lower level of oxygen told on my lungs, which passed on their discomfort to the rest of my body.
I was able to continue on nonetheless and made my only social contact of the day near the top of the pass.  Irene and Sandy were in the process of grooming their horses after a ride when I introduced myself and began begging for water.  They gladly obliged, giving all they had.  The cold liquid was beyond delicious after so much exertion in the dry climate of Colorado. 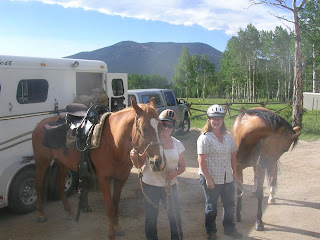 Half an hour later I left Squaw Pass and with the sun ducking behind the mountains I looked for a place to camp.  An appealing meadow drew me in and I set up the tent and settled down.  To relax I read a book, "Zodiac," which tells of a series of unsolved murders that took place mainly in the San Francisco area.  What better to ease one's mind while alone in the wilderness than reading about stabbings and knifings committed by a man who was never apprehended?
As dusk fell and I prepared to tuck the book away three figures appeared at the other side of the clearing.  No psychopaths these, but rather a fox leading two small elk.  The fox was unconcerned with my presence, traipsing in no hurry past the Half Dome.  The elk, a little less interested in an introduction, turned around and left the meadow.    And I went back to being alone.