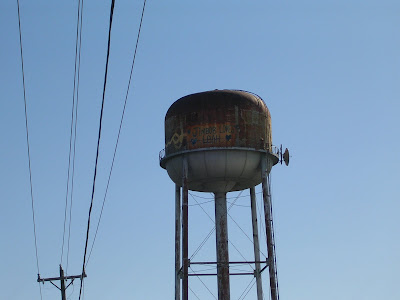 Final countdown time has come for me, with little over a week before my departure. I figured that a picture of the water tower along my regular walking route might be a fitting piece of Americana to symbolize that impending departure onto the roads spanning our great land. I want to thank Jimbob and Leah for adding a bit of flair as well as a smattering of class to the Rutherford Road tower's original design. I just hope Jimbob's passion resulted in the loving bonds of matrimony rather than the waiting embrace of a police car after the issuance of a restraining order by Leah's family.
Speaking of H2O, I finally purchased a water filter for the trip today. My procrastination was ended after I listened to a friend from my softball team painstaking tell of his own experience with a bout of giardia. I do not care to partake myself.
People are beginning to take notice of my wandering ambulations through the nether regions between Taylors and Greenville. Our local UPS driver stopped by me this afternoon and asked how far I would be walking today. Maybe I could convince his superiors to have trucks come and carry my pack to where I plan to stop for the day - it sure would be helpful not have to lug the heavy thing around. Hey, I promised to walk across the country, I didn't say my dirty T-shirts were going to go every little bitty step of the way with me.
I want to thank Brady Gilbert and the Traveler's Rest Area Business Association for allowing me to talk to them during their luncheon on Tuesday. Although I gave one of the more bumbling speeches in the history of oratory they treated me wonderfully and I met a great group of people who I hope will be tagging along with me on the journey - at least virtually.
I will be out of Greenville this weekend attending nuptials on Edisto Island for the delightful Dan Hastings and the fetching Brianna Rabon, but if anyone would like to join me for a sending off I will be out at the Irish Pub on Sunday evening, please come visit - everyone is welcome to smash champagne bottles against my head like they do with new ships before their inaugural passage.
I leave you now with a lovely rendition of "the Final Countdown" by Europe, a band that would begin and end their shows with that same tune, their one hit. Most critics lambasted the 80s hair band powerhouse for using such a set list strategy. These nitpickers would say that the band was admitting they had no other powerfully moving songs in their repertoire. I say no to these accusations. Rather Europe was defying convention by doing something that no other band was willing to do. Maybe we have something in common.
Posted by Alastair McCandless at 10:28 PM

Alastair are you going to be blogging while on your trip?
Beth

Most definitely Beth, tune in for more exciting adventures!

Alastair, your committment to such an awesome undertaking moves me...the road warrior supporting our military warriors who have been wounded while serving our country...I was wondering if you had an ETA for northern Kentucky and Indiana as the Crone girls want to support you in some fashion...maybe wash your tshirts...haha...I know your Mom is proud but then again your Mom is always proud of you and your brother! I would like to help raise funds or provide in support that I can here in Indiana...you will be in our thoughts and prayers. As a military spouse whose husband is currently in Iraq and the daughter of a veteran I sincerely thank you!