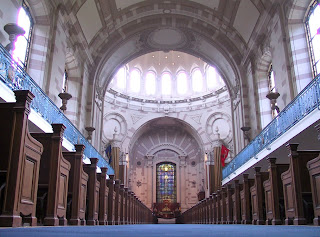 I arrived in Annapolis after my shortest day on the ADT yet. As I mentioned, yesterday's route ended right at the hotel, so Nalan and I just exited the lobby and headed straight back onto Highway 18 where we crossed the first of three large bridges for the day and vacated Kent Narrows. The shadow of the imposing structure of the Highway 50 bridge loomed overhead and the roiling waters of the bay lay below.
As soon as we finished the bridge we joined the Cross Island Trail. The trail was marked with the first ADT sign I have seen in Maryland so far and parallels the main highways of 18 and 50 through woods and marshland, a much better alternative to facing the heavy traffic of those roads. Nalan again proved a great nature spotter, finding a five foot black snake of unknown species alive astride the path. I got a very good picture - we have now seen large snakes on three consecutive days, I'm thinking of setting up a Vietnamese restaurant nearby.
The trail ended in Stevensville after 5 miles and we had to go by car to cross the Chesapeake Bay Bridge, as pedestrians are not allowed on the span. We then proceeded to another man-made triumph over water, the Severn River Bridge. The view from there was spectacular. I snapped pictures of the Naval Academy and some of the seven figure manor houses sitting astride the river whilst I crossed into Annapolis.
We left the trail after the bridge to explore the city of Annapolis, where we could duck into the cover of a couple of pubs during the rain that fell for most of the late morning. Dad and I wandered about the Naval Academy campus where we got a close look at the splendid chapel and the crypt below that holds the remains of John Paul Jones. Like fellow musician Jim Morrison, he was buried in Paris. Unlike the Lizard King, he was dug up and brought back to the US one hundred years later (I guess that could still happen to Jim). JP also was an important captain who captured numerous British vessels for the nascent American forces during the Revolutionary war. What a versatile dude.
The Capital building is also another site one should not miss if coming to Annapolis. The building is the longest serving state house in all of the country, dating back to the 1770s. During the Articles of Confederation period before the signing of the Constitution Annapolis actually served as the nation's capital. For most of the 18th century and a bit earlier the city was one of the most important ports in the colonies.
Finally, we saw the Kunta Kinte/Arthur Haley memorial, honoring the famous character from "Roots" and his creator. The real Kinte is said to have arrived in Annapolis harbor on a slave ship from Gambia.
In summation, I did six miles of the ADT today and then an unknown number of miles walking around Annapolis. Dad, Nalan, and I are spending the night in the suburb of Parole*. I am off now to discover whether the citizens of said town are known as Parolees.

*Parole was established as a POW camp for Confederate soldiers during the Civil War.
Posted by Alastair McCandless at 8:54 PM