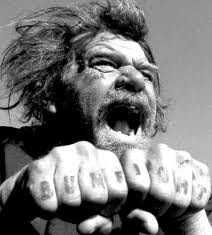 I was shopping today for a present to be used in a Secret Santa game this weekend when a moment of indecision occurred. I could not choose between "Oh Snap, the Ultimate Yo Mama Fight" or "Bumfights 3."
I came to the conclusion while pondering this dilemma that there may no longer be anything in our society that can shock us. I wasn't even in a DVD store (it was a record store) and there were over one hundred videos whose main theme seemed to involve death, dismemberment, or severe injury of another sort.
Apparently "Faces of Death" has now reached an incredible six installments thus defeating "Final Destination," which only managed to fill three movies with disparate death scenes. We have seen so much raw reality that we can no longer think of anything fictional to top it. "Bumfights?" Really? They pay poor homeless men and women to beat the everliving hell out of one another? Howard Stern claims in a blurb on the DVD box to have been shocked.
Christ - how to you top that? Chickfights? I looked, they had done five discs worth of chickfights already. Cripplefights? Oops, already been done on South Park. Battle of the mentally ill? Just watch the Republican/Democratic Primary debates. The only thing left is for the candidates to attack each other with chainsaws (keep your fingers crossed).
Science fiction/horror writers of the past seem to have been remarkably prescient. A TV show like "The Running Man" (book way better than the movie, although the movie has some great Schwartzneggerisms) is no doubt in the works as we speak. How can a simple writer like myself hope to shock anyone in such a society? I will start by purchasing "Oh Snap" and maybe later I can attend the midget tossing championships at O'Hooligans tonight. Who knows, perhaps I will get a few ideas.

Postscript - Two days after writing this essay, I was sent a video entitled "Two Girls and a Cup." After one viewing I was refreshed and revived - there still is plenty of room out there in the realm of shock entertainment (I can hear the sighs of relief everywhere, from the shores of Howard Stern to the halls of South Park, Colorado.

Something kinda sad about,
the way the world has come to be,
desensitized to everything,
what's become of subtlety?

-"Stinkfist" by Tool
Posted by Alastair McCandless at 3:02 PM