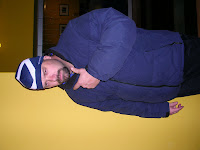 For all of you hanging on the edge of your seat waiting, I was going to write the continuation of the "Modernization" story today. But since I have learned to hang from the corner of the screen, that kind of shit bores me and besides events, circumstances, and such things beyond my control have interceded and I must take a different turn today and write my first music review. Note to reader: the next paragraph is a serious discussion the first two bands, feel free to skip down if you could give a crap about what I think about the Shins (summary: I like them).
On Sunday night I went, along with my brother and several friends to a concert down in Atlanta (not my favorite town, but I will save that diatribe for a later time). The show included the Silversun Pickups, the Shins, Silverchair, and Modest Mouse. Silver Sun, whom I had never heard, took the stage first. They sounded very good - the singer had a very unique vocal style which I enjoyed very much. The Shins followed with a very strong but sadly short set. They only played for a little over thirty minutes and the last song was a cover of David Bowie's "Suffragette City." It was a very good reproduction and a neat surprise, but I would have much rather heard their original material, of which they have plenty.
The worst part up to this point of the "Mistletoe Jam" ,as this night was called, were the DJs from the Atlanta radio station sponsoring the show. There are no more annoying people on Earth. Their entire existence seems to be predicated on being louder and more obnoxious than those who came before them. These are the guys (and girls on occasion) in your high school class that would cause a collective groan from the class whenever the teacher called upon them. When these folks came on stage during the pauses between bands, I wished I had a rifle with a scope and the shooting talents of Lee Harvey.
Then came the most appalling noise I have every had the pain of suffering thru in my entire time upon this planet. After five minutes, I was begging the DJs to return to the stage. I am a huge music fan and have gone to hundreds of shows and nothing in my past experiences could compare to the aural awfulness that was the third band. Silverchair. Just the name can be used to scare young children into obeyance. Fuck the Bogeyman, he is a total pussy.
I was interested in hearing Silverchair since they had basically disappeared since their hit album of 1997. Had they found a new, edgier sound? No - any shred of talent they once had is now gone. Plus their singer, Daniel Johns is a total dick. The general consensus amongst my friends was that the band could have been okay if not for the singer. The dude seems to think he shits lollipops and pisses rainbows. I am to assure you that is not true. Most of the Silverchair set was spent by that ass hole trying to get the crowd to stand up and cheer. Note to anyone considering a career in music: If you have to try to convince the people attending your concert to get into the tunes, there is a very good chance that your band is terrible. Most people, when they hear good music, will get up and dance and sing on their own. No cajoling is usually necessary.
Oh and not to be forgotten - the DJs introduced the band by talking about their one hit, "Tomorrow." Think they played it? Nope, those dicks are too good for that. Their fan probably wanted to hear their new stuff, which in fact sucked worse than suckiness has ever sucked before - a new plane of suckitude as it were -raising the bar of sucktacularity beyond where it was previously thought to suck. Plus that douche singer kept taking off clothing throughout the show to excite the crowd - since his music had no hope of doing so. This would have been hot if he was not a complete douche whose douchebaggery is of proportions heretofore unequaled except perhaps by morning DJs. After forty minutes of this I left. I kept thinking I could take it - just one more song and it would be over. But it never ended. I walked out and hung out in the lobby. I have never left a show before. Ever. This is how much they sucked. A complete ten out of ten for ineptitude. If that was their goal, then mission accomplished. The only good bit of news is that this was their last show on the tour. Hopefully for music fans, they will never leave their home country of Australia again. Actually I like Australians, so hopefully they will never perform again. Ever.
Then came Modest Mouse to close the ole Mistletoe Jam. They were good. Wish they had played an encore, but otherwise a great performance.
Summary- Silverchair = SUCK
Posted by Alastair McCandless at 1:18 PM