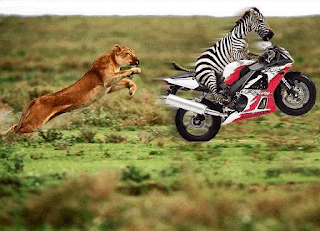 Yusef ran thru the city, fear pulsing through his veins like wind through a tunnel being used to test the aerodynamics of an Airbus. He must find a place to stay the night. There was too much at stake. He and those with him were being pursued to the ends of the Earth.
No time to think about tomorrow. Survival was a minute-by-minute process that did not afford such a luxury as a hope for the future. Protect and survive, these were the only thoughts that crossed his mind.
The dogs of Harold Blofeld were everywhere. Despite his death over four years ago, Harold's minions continued the hunt unabated. Harold had foreseen the child and knew what was at stake. Their leader, Dogbreath, could smell fear in the air. Fortunately, he was blind and kept running into things like flag poles, for example, or he would have found our hero by now.
He knew Yusef and the prize he held in his arms were close. Yusef and his family were from Elizaville and would have to return for the census the American government conducted every ten years. Dogbreath had searched day and night for these four long years and his face and mind carried the scars to prove it. His nose had been broken so many times that it sagged on his face like a drooping violet, pointing the way towards his mangled right ear.
There would be no sympathy for Yusef and his companion from a man whom civilization had left in the gutter to rot (and rightly so, he was a total piece of shit - if I woke up that ugly I would kill the hell out of myself). Dogbreath had only one reason for existence and it was the death of those he pursued - the last order his master Harold had given to him.
Yusef dashed under the rusty roof of the barn with his burden carried in his arms before him. This dirty bit of straw would have to do. He could no longer stay on the streets hoping to elude those who sought him. His only prayer was to hold out here as long as possible in hopes that the three old men he had seen in his dreams would come save him.
The triumvirate claimed to be secret agents sending him a message. The old fogies had seen the supernova in their sky lenses and knew that the time was now. They would arrive as soon as their Ferraris could make the drive from Dakar. Yusef, according to these nursing home secret agents, needed to sit tight and chill that bitch out and things would be alright.
So Yusef holed up and waited - and Dogbreath moved closer.