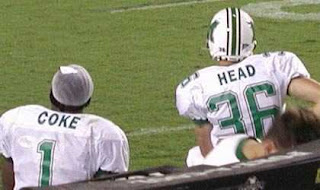 Hey boys and girls, its that time of year again. As the NFL hits its stride and we begin to wonder if the Patriots will ever lose and if the Dolphins will ever win, its time to look at names in the NFL - everywhere from the obscure to the obscene. Here we are, the greatest monikers in the NFL, at times doctored to gain a pronunciation that pleases my ears more - and hopefully yours too! Oh and here is to hoping that my boy Dakota Fagg (the boy named Sue of the college game) makes it to the NFL. These guys prove the Man in Black to be a prophet. They had to get tough or die.

QB - DJ Shockley. Forgive me, I just like this name. This Falcon's backup QB sounds like someone Eminem would have defeated in a rap battle if he had ever made a sequel to "8 Mile." What a tragedy that never came to fruition. He will only hold this job until Colt McCoy, the most perfectly named quarterback in the history of the universe, graduates from Texas.
RB - Madison Hedgecock. Doesn't this Giants fullback conjure up the mental imagine of a depraved Edward Scissorhands changing the shrubbery of his small town to fit his hitherto unknown phallic obsessions? My belief is that the knights who say Ni! made him do it.
RB - B.J. Askew. This TB runner knows better than anyone that there is nothing worse than when a pleasant moment of felatio goes terribly wrong.
WR - T.J. Houshmandoucheman. This receiver for the Cincy Bengals has such a long and unpronounceable name that a little help is needed to make it sound pleasant and clean, like a summer's eve.
WR - Craphonso Thorpe. Believe it or not, this Colt receiver actually lined up beside the aforementioned Fagg at Florida St. Hard to be over-shadowed your own team much less the all name team with a nickname like Crap (that is his nickname right?).
WR - Mike "Super" Furrey (Animal). If you are not a fan of the Detroit Lions or obscure Welsh pop bands then move on, there is nothing to see here.
TE - Todd Yoder. Although he has mastered the force, this Washington TE cannot pass Chris Cooley on the depth chart or a grammar test for that matter. Think you his syntax bad it is? (Cooley is rumored to be a Sith warrior working for Emperor Palpatine).
TE - Tony Curtis. This classic thespian (no that has nothing to do with being a cunning linguist) scored several Oscar worthy hits, not to mention a TD for the Cowboys last weekend.
OL - Richie Incognito. Not hard to stay unknown and down right undercover as a lineman for the 1-8 St. Louis Rams.
OL - Ryan "Carpe" Diem. The other bookend for our team is this Colts tackle who is bound to seize the day! And if you don't get that joke your English teacher sucked.
OL - Guy Whimper. With a name like that you have to think the man is a pansy, not a 300 pound lineman.
OL - Jermon Bushrod. Many have confused this Saint's tackle with the Teutonic porn idol of the same name. But, alas he did not star in "Mein Cockf" or "A Fuhrer in Your Pants"
OL - Cory Lekkerkerker. If you have been wondering where the KKK has been lately, it has been hiding out inside this Dolphin's name.
CB - Ashton "of" Youboty. Pronounced Ass ton of yo booty. This Bills corner has to take heavy doses of penis altering drugs to maintain his stature.
CB - William Gay (Honorable Mention: DeMarcus Faggins). As we await the arrival on the pro scene of Dakota Fagg, Mr. Gay will have to do double duty, playing for the Steelers and being picked on for his unfortunate moniker. ** Editor's Note: Although in disagreement with the majority, the author believes that the word gay means super awesome people who are God's chosen ones.
S - Atari Bigby. This Packers defensive back hearkens us back to the days when Pong, Pac Man, and Frogger ruled our worlds. What, you aren't old enough to remember that? Well, fuck you then. Seriously though, how fucking high were his parents when they named him that? If it is a tribal name I guess he is lucky not to have been named Nintendo Playstation.
S - Jamaal Fudge. No particular reason to pick this Jaguars safety, besides the fact that I am terribly hungry right now.
LB - Brendon Ayanbadejo. This Bears special teamer like Bengals WR T.J. needed a change to his way too long name. He shall henceforth be known only as "I am a Banjo"
LB - Akin Ayodele. Doesn't this Cowboy stud seem similar to a Swiss mountaineer's song?
LB - A.J. Hawk. Just a bad-ass name for a bad-ass player. Nuff ced.
DL - Kimo von Oelhoffen. Although originally destined to be a fighter pilot in the Luftwaffe during World War II, a tragic time machine accident sent him hurtling through eras, ending as a DT for the Philadelphia Eagles.
DL - Ma'ake Kemoeatu. Something tells me it would not take too much convincing to make this 350 lb Panthers lineman eat you.
DL - Sam Adams. Expecting a history joke of some sort? Dude, beer! Duh. And boy does this Bronco look like he could put away a keg an hour of that delicious concoction.
DL - Igor Olshansky. Fans of the Mel Brooks classic Young Frankenstein will know that the Chargers lineup prefers his first name to be pronounced Eye-gor. And that he does not have a hump on his back.
K - Jay "Touchy" Feely. Ahhhhhhhhhh, what a cute little Dolphin. Sensitive enough to be a kicker? Perhaps so.
P - Jeff Feagles. A nostalgic pick here. When this present day Giant kicked for the Eagles the world just made sense to me. Speaking of nostalgia, I really miss Toby Gowin, as in Toby Gowin to punt.

There you have it, your 2008 NFL all name team. If you have any suggestions that I may have missed, feel free to comment - if you provide a good argument maybe you can improve my lineup.
Posted by Alastair McCandless at 3:52 PM

My honorable mention would be Rex Hadnot, a center for the Miami Dolphins. The lowly winless fins certainly can appreciate the plight of the Hadnots.

Your blog keeps getting better and better! Your older articles are not as good as newer ones you have a lot more creativity and originality now keep it up!