Circleville Gets the Square

I strolled into Kingston Sunday morning wondering if I would be invited to my first Mormon service.  No such luck as the microscopic village was the first community I have seen in Utah without a LDS church.
Kingston does have a unique history, having been founded as a commune.  The original settlers shared a grist mill, dining hall, and cattle, in addition to crop production.  The grand experiment failed and no evidence remains. In the 1970s a controlled burn on the edge of town came unleashed and incinerated the old buildings.
The larger Circleville was only a few miles away and I reached the city limits in time for an early lunch.  The counter top at Dottie's was covered with articles detailing the history of Circle Valley.  Their most famous resident had been the teen-aged Butch Cassidy, whose family moved there from Beaver.  Butch clearly learned the lay of the land in Southern Utah well during these years.  During his criminal career he made regular use of hideouts there, including Giles Town and Robber's Roost.
The Cassidy ranch was a few miles south of town, but I turned into the woods a bit earlier, entering Fishlake National Forest.  An early Mormon leader, Parley Pratt, led an exploring expedition through this region of Southern Utah in 1849, helping lay the groundwork for the church's expansion there.  Posts of wood memorialize Pratt, who was tragically murdered in 1857 by the estranged husband of his twelfth wife. Clearly he should have stuck to the more manageable number of eleven. 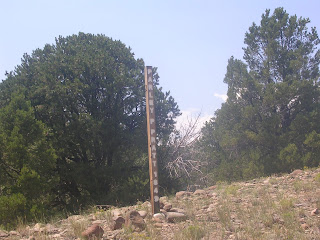 The incline steadily grew as I walked, and the sun's power seemed to increase proportionally.  I stopped at every shady tree and paused, praying the small black cloud to the east would dump its moisture and cool my skin.  Fatigue grew exponentially and I began to feel sick to my stomach, perhaps having over-compensated with my water intake.
I was forced to half early, extremely upset to have covered so little ground.  No sooner had I set up than the skies opened and I sat miserably in the tent listening to the rain, which did not let up until sundown hours later.
I wonder now if some higher power was slowing me down.  There would be trouble tomorrow, the most serious of the entire trip.  I would need every ounce of my strength to survive.

Posted by Alastair McCandless at 2:23 PM