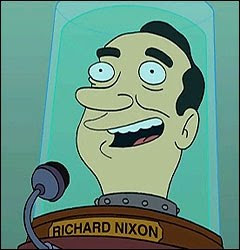 Jaded South Carolinians have been left even more stunned and amazed than usual today thanks to a bold statement coming from the State Democratic Party Chairman Carol Fowler.
During Fowler's comments to the press regarding President Barack Obama's State of the Union speech she dropped the following bombshell:
"I want to assure the people of South Carolina that our system, long utterly dominated by the Republicans, will one day soon present them with a series of choices between two candidates. The long awaited resurgence of the Democratic Party is just around the corner."
After her pronouncement Fowler was asked what would be a realistic time table for the Party to reach minimum standards of competitiveness in state politics.
Fowler answered, "We have to be patient and realistic. The Republicans have only been in power here for thirty years or so. The fact is, we have the third highest infant mortality rate, the tenth highest incidence of AIDS/HIV, the tenth highest rate of poverty, and the fifth highest level of unemployment. We have been near the bottom nationally in all these terrible categories and more for a long time, but these are just truths we have to allow the public some time to absorb. I can feel confident in saying that by the year 2040 we will be a minor factor within the context of South Carolina politics."
Recruitment efforts for that year's elections have apparently already begun. "We are looking at a strong class of candidates for 2040," Fowler continued, "Negotiations are ongoing with our top prospect, Richard Nixon's head. We feel the Republicans are going so far to the right even "Tricky Dick" will be considered a Democrat by the time we develop the technology to bring him back to life physically and politically."
Unknown and forgotten by many South Carolinians, the Democratic Party was once a juggernaut, attaining a stranglehold on the political landscape by presenting themselves as the protector of the white man against the fearsome mythical white- woman-molesting negro. During the 1950s the Republicans came to prominence by using an obscure political tactic known as "outniggering" their opponents. Shortly thereafter, the mule symbol of the Democratic Party became besmirched, unable to match their political opponents impressive ability to scapegoat and oppress.
Fowler admits that her Party has made some mistakes in the past, but insists the time for forgiveness has come. "We here in South Carolina believe in the Christian ethos and I think Jesus would want us to forgive one another so that we may have a two-party system."
Karen Floyd, the current chair of the Republican Party when asked to respond to the Democratic Party's comments was befuddled at the query. "Who?" Floyd replied.
Posted by Alastair McCandless at 10:07 PM

Lt. Gov. Andre Bauer, when asked to comment on Fowler's statement, responded, "Democrats are like stray animals, if you feed them they breed. The last thing we need are a bunch of feral Democrats crawling through the dumpsters of South Carolina's Restaurants making the customers all uncomfortable and creeped out. It would be bad for our great state's economy."