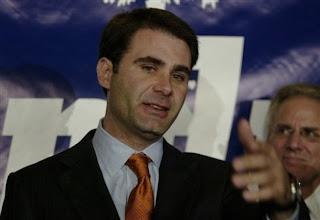 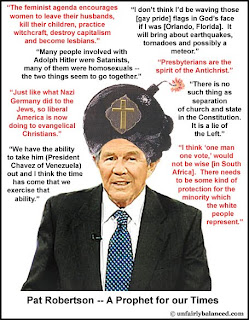 The United States synchronized insanity spouting team just got a whole lot stronger today, as Pat Robertson and Andre Bauer declared they would be uniting to compete in the upcoming Vancouver games.
Fans around the United States applauded the decision, as the duo is sure to gain a medal for a country that has had little success in many of the cold weather sports, prevalent in the Winter Olympics for whatever reason.
According to Larry Probst, Chairman of the the United States Olympic committee, the two came to mind immediately when synchronized insanity spouting was first announced as a sport.
"Obviously Pat has been on the scene for quite some time and everyone remembers his remarks suggesting we assassinate Hugo Chavez. Oh, and the one about placing a bomb in the Pentagon, I think everyone enjoyed the irony of a clergyman making a statement like that. The judges tend to score extra points for irony," Probst stated.
When asked about Robertson's statements on Haiti, Probst continued,"We are all glad to see Robertson has been keeping his tongue limber and his mind limp. That kind of blazing ignorance is sure to bring us home the gold."
Bauer was a slightly less obvious choice for the Committee. "Most Americans will see Bauer as a newcomer to the event, but South Carolinians know their Lieutenant Governor has been practicing the art of linguistic absurdity for many years now. I am confident the fans will be supportive of our choice when they hear Bauer in action," Probst asserted.
The South Carolina politician, who has been a fool on the state level for many years now, is just making national news for the first time thanks to his comments comparing the poor to stray animals.
Governor Sandford, applauding Bauer and his Olympic ambitions, said "what a strong attack, right out of the gate, I just hope he stays relevant in South Carolina politics long enough to continue to make his mark. Despite his self-serving calls for me to resign, his presence as Lieutenant Governor has certainly kept me in my job, so I owe him all the support I can muster."
The pair has immediately been installed by in Las Vegas as 10 to 1 favorite in the event, which is being introduced into the Winter Games for the first time this year.
Bellagio bookie Joey Bagadonuts doubts there is much hope for any of their competitors to do better than second place. "The statistical improbability of Robertson and Bauer both saying something that makes sense on the same day is astounding. If one fails then the other is sure to carry the day for the American side."
Posted by Alastair McCandless at 10:11 PM

I heard that upon hearing the news the Biden/Busch team has decided to sit out this year.

Busch Light. Yum...that is all.

Holy crap that is hilarious.