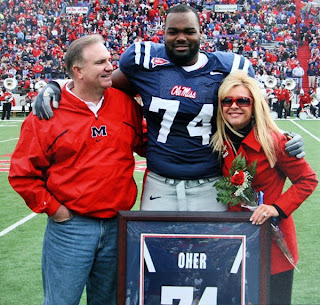 We here at Thoughts Askew have been sitting back in our Armageddon-ready chairs (manufactured with built-in rapture) watching the world drift through clouds of chaos into the midst of madness here of late. Even I am beginning to think there is more than one of me, which is true if you include myself as well. In fact, me, myself, and I have each picked out an important book you can read tomorrow that will help to clarify our mysterious existence. No philosophy here, just facts from authors who can see through all the bullshit and sniff out reality amidst all the obfuscations.
Myself, forgetting we had talked about this book before, chose "The Blind Side" by Michael Lewis. He thought it would be a good response to the bad rap poor people and stray animals have been getting these days. Lewis demonstrates, through the story of Michael Oher (pictured with his adopted parents above), an African-American child raised in poverty and later adopted by a white family, that given opportunity and assistance even the poorest among us can be successful. Granted, playing for the Baltimore Ravens isn't as great as being on my Chicago Bears. Check out the link at the beginning of this paragraph for more information on "The Blind Side" as well as a picture of whale vomit being held by an elderly lady.
"The Blind Side" has also been made into a movie. The star is Sandra Bullock. Don't bother seeing it. You have been warned.
Me picked the book "Culture of Fear" by Barry Glassner as his contribution to our trinity. Me believes that even though Glassner's work is slightly outdated, having been written in the late 1990s, seemingly a millennium ago, we can still learn glean invaluable information from within its pages. "Culture of Fear" deals with the manner by which the media, politicians, and various interest groups use scare tactics in order to influence our thinking. Glassner also points out how small issues, like teen violence and teen pregnancy are blown out of all proportion to distract us from the bigger issues such as poverty and the prevalence of guns in our country, among others. Me agrees with the author and feels that as Americans we have a tendency to say,"if only this one thing could be changed everything would be okay." In reality our problems are more complex, but that does not make them unsolvable, we just need to learn to focus on the right things. Read Glassner's book and learn to see through the charades.
I, being a political science major, wanted to use his book to inform everyone of a threat to our country and even the world - our military. Now calm down, I don't mean that your Uncle Bill serving in Afghanistan is a terrible person and a threat to humanity as a whole. Not at all - Bill is just a pawn being used in a terrible game of chess being played by our government's massive military complex.
I learned of our imminent danger thanks to Chalmers Johnson and his work "The Sorrows of Empire." Thanks to Johnson, I discovered that we have 750 military bases around the world (in addition to the many hundred within our borders), many in countries most Americans have never even heard about before. Our government, which has been running massive deficits since 1980 with the exception of a couple of years under Clinton, spends the equivalent of the next forty largest armies on Earth for defense.
Johnson's book takes at look at how all of this money is spent and analyzes why we would need such a massive juggernaut to protect our shores. Without the Soviet Union around (whose effectiveness as a threat after the 1960s Johnson questions as well) there is no one to contest our power. Iran or North Korea are dangerous you might say - and their leaders are a bit kooky, who knows what we might do. Of course when you look at the fact that we have enough nuclear weapons in our stockpile to destroy the planet many times over, you know that any attack on the United States would be suicidal.
I could go on for a long while regarding the content of "Sorrows of Empire", particularly the various companies that have made disgusting profits from our bloated armed forces, but I recommend instead that you pick up the tome and digest the information inside yourself. I felt like the volume was literally burning my hands due to all the incendiary information contained in its pages. Me and myself agree.
Posted by Alastair McCandless at 10:20 PM