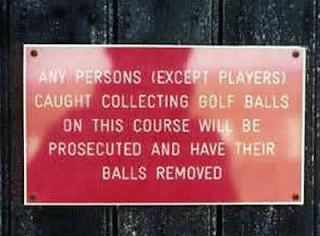 The South Carolina Legislature voted today to approve a plan designed to stimulate the state's ailing economy. In the words of Speaker of the House Bobby Harrell, the proposal aims to "turn the entire coast of our great state green."
Asked if the Legislature meant to try to cut down on carbon emissions in the coastal regions, Harrell replied,"Hell no, we are going to build a gigantic golf course stretching all the way from the sands of Hilton Head to the Ferris wheels of Myrtle Beach."
Amazingly, the project will only cost the state two million dollars, as 97% of the area included in the bill is already covered with the greens and fairways of nearly 1,000 pre-existing courses. Most of the cost will be made up easily within the next five years through the collection of cart and greens fees. "Kind of like a toll road for duffers," Harrell joked.
There still is work to do though, and an estimated 1200 jobs will be created by the new program.
"We'll just be filling in the blank spots on the map," said Chip McGee, a contractor who has signed on to complete the patch between Awendaw and Georgetown.
Early estimates indicate the course will have 3,000 holes and a round should take between three and five years to complete, depending on the quality of the player. Those with handicaps over twenty are recommended to avoid such a time-consuming endeavor.
Highway 17 will now serve as a cart path for the complex. The adjacent beaches will be closed and reserved for use as bunker materiel.
The flotsam and jetsam of humanity that reside nearby will also be removed. "There really is no reason for anyone to be in the vicinity of Myrtle Beach or Hilton Head unless they are playing golf," asserted South Carolina's new Director of Population Distribution Drew Jackson.
Jacson is charged with the task of shifting the local populace to new settlements. According to the Director, "we don't want the players to have to associate or even glimpse any of the riff-raff hanging around in these parts. My job is to make sure their eyes remain unsullied by poverty, even the middle class type. I'll be putting a curtain over the "Corridor of Shame" so-to-speak."
The Population Distribution Committee, who have been appropriated $33 to help with resettlement costs, is looking to create a reservation west of Marion, that will be known as New Daufuskie, commemorating the African-American residents of the island off of Hilton Head who had the courtesy to evacuate during the 1980s to allow a series of ritzy developments to be constructed on the island.
The news isn't all bad for locals lacking in affluence. Ten lucky current residents will be given the honor of staying to act as caddies for the golfers.
Posted by Alastair McCandless at 10:09 PM