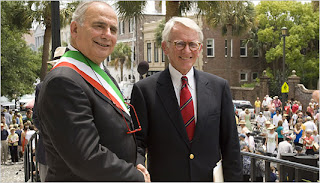 In a move thought long overdo by a majority of Charleston pundits, Mayor Joseph Riley has declared himself Emperor of the city of Charleston and the surrounding fiefdoms of Summerville and James Island.
Riley spokesman Thomas Carruthers admitted the time was long past due to dispense with the farce of mayoral "elections" now that the mayor's reign has reached thirty-five years in length. "Why bother?" Carruthers wondered.
The new emperor began his rule way back in December of 1975 and has won numerous electoral contests in the intervening years to retain his grasp on power. Riley, seen in the accompanying picture meeting with Italian diplomat Joey Buttafucco, was humble in accepting the promotion. "I've worked hard over the last few decades for the people of Charleston and I feel honored they have rewarded me with the responsibility of absolute power," the former mayor stated.
The coronation has been set for April 15 at St. Phillip's Church and dignitaries from all across the vast lands under Riley's control are set to attend. The Discust has learned that during the ceremony, the tri-county area of Charleston, Berkeley, and Dorcester Counties will formally be renamed Rileyland.
Charlestonians, although conservative by nature were surprisingly supportive of the changes. "Hopefully the Riverdogs will be given a new nickname as well. That has to be the shittiest mascot in the history of professional sports," commented Florence Porcher.
"A lot of the crap in this town is named after French people and the Frenchies are a bunch of dumb surrender monkeys. Its about time we changed the name of a lot of things around these here parts," redneck representative Randy Riggins remonstrated in his nearly incomprehensible patois.
A rumor that the city council is planning to annex Savannah as a present to their lord on his ascension day has not yet been confirmed by this reporter.
Republican Mayor Knox White of Greenville, in a fit of jealous rage after hearing the news of his bitter rival's coming coronation, has proclaimed himself Tsar of Greenville. The new Tsar also declared a pogrom designed to rid the Upstate of its last few remaining Democrats.
Posted by Alastair McCandless at 10:31 PM