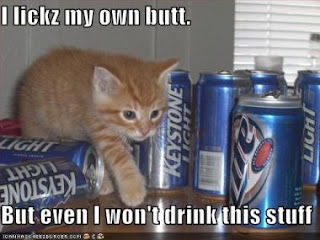 I just finished the book "Travels with Barley" by Ken Wells. The work is subtitled "The Quest for the Perfect Beer Joint," but many aspects of beer and beer culture are discussed within its pages.
One personal point of interest concerned the existence of beer snobs. I haven't spent a lot of time considering the existence of such a class of humans. I expect such elitism from wine drinkers, but not your average blue-collar beer drinker.
I was once derided myself in an Asheville bar for choosing to drink a Bass ale rather than a local ale. I thought very little of the encounter at the time, outside of wondering why the hell he cared about what touched my tongue, a unique flavor sensor unlikely to share his same passions.
Nonetheless, I do have strong opinions on certain beers. I prefer lagers rather than ales or other "hoppy" beers. I like a smoother taste and the hoppier beers tend to give me indigestion. Regardless of how good something tastes, a certain amount of pain in return is simply not worth the pleasure gained. There are exceptions to even these rules - I was at the time of the incident just recalled, a bit of a Bass fan, and I have gone through periods where I drank a lot of Guinness, as well as Newcastle Brown Ale.
I would have to admit that I like changing my beer of choice on occasion. This month it may be Red Stripe, by June I might be pouring Stella Artois down my gaping gullet. My love of drinking games will drive me on occasion into the caressing arms of a case of my long-time friend (and enemy of the beer snob), the cheap mass-produced lager, Busch Light. I would even quaff the Keystone and Miller products disdained by the butt-licking kitty beer snob pictured above.
I guess I would say in summation that although I have some general preferences, I feel I am pretty open-minded about beer and will try almost anything once. There are, however, four brands I just won't go to anymore for a pint. Here is the banned list: I plead guilt to my own personal beer snobbery.

4. Chili Beer: Down in Charleston, during my younger days when I would try just about anything once, I bought one of these beers with a jalapeno pepper floating inside the bottle. I know, it sounds like a terrible idea - and so it turned out to be.

3. Coors/Coors Light: Although I will drink a Killian's on rare occasion, the Coors Brewing company is otherwise dead to me. I would like to give you a high-minded reason like their disdain for gay rights and other right-wing positions the company's owners have taken over the years. Sadly, I would be lying - if they made a great beer I could probably put all that aside. In reality, they make flavorless piss up and down their product line and I just don't care to purchase anymore.

2. Natural Ice (a.k.a. Natty Ice): The ice beer was the hot product of the moment during my college years. For the first time, the massive behemoths of the beer industry had introduced lagers with an average of 5% alcohol by volume, rather than a measly 3%. For college students looking for ways to get retarded drunk in 2.3 seconds, the ice beer was a revelation. The unfortunate downside was that the beer companies hadn't actually bothered to make a beer that was drinkable as well. The one case of Natty Ice I purchased was the only case in my life I can remember throwing away with several untouched beers still left inside.

1. Icehouse: Yet another ice beer, Icehouse was supposedly made by Miller Brewing Company at the storied Plank Road Brewery, as the company called the place where they didn't really make the brew. I only wish that my career of drinking Icehouse was equally as fictional. People used to actually purchase kegs of this rot-gut booze and I was young and dumb enough to think that if I just drank it fast enough that it would no longer taste like the fermented leavings from the bottom of my garbage disposal. The result was, that I, not used to the alcohol content difference and unwilling to drink the swill slowly, inevitably became so drunk as to incur brain-lock. Many stories of my boorish behavior can be recounted to you by others in my fraternity (and I won some awards - not coveted ones), but since my mind was in off-mode at those times, I cannot personally recount them to you, dear reader.
Unfortunately, I do remember the day after drinking Icehouse, and not terribly fondly. You may recall yourself the displeasure of violent headaches and gastrointestinal agony from one of your own "day-afters." I had a few of these days myself after a night of Icehouse, but the worst was the day I woke up to find my face half-submerged in a puddle. No, I didn't pass out in a gutter - that would have been a preferably result. Miraculously no doubt, I was safely in my own bed, gazing upon the contents of my stomach from the night before.
The cleanup period of the next day (many thanks to Josh Gillespie for helping me through that day) convinced me never to touch an Icehouse again. Not to be a beer snob, but I suggest that you do the same.
Posted by Alastair McCandless at 10:26 PM

Dude, I'm chocked Bud Light didn't make this list. WTF is the difference between Bud light and Coors light. They taste the same for practical purposes.

Fair question bro, I just have something against Coors and always have - Bud Light, Coors Light, Miller Light, etc. do have pretty similar flavors (watery ones) but I just don't have the same bias against those others. They aren't my go-to beers but if someone orders a bucket I shan't disdain it.