Flobots to Ride Their Bike at the Handlebar 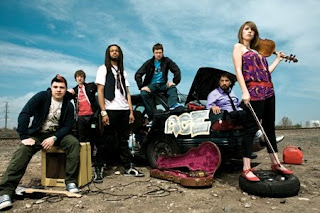 May 27 will bring an original mix of Rocky Mountain hip-hop and rock to South Carolina as Denver, Colorado's Flobots will be performing at the Handlebar in Greenville along with opening acts Trouble Andrew and Champagne Champagne.
The Flobots are currently touring the United States in support of their second full length album for Universal Republic, Survival Story. The band came on to the scene back in 2008 with the song "Handlebars," a tale of ego run wild with distinctive political undertones.
The band is never unwilling to share their personal beliefs, as demonstrated throughout their first release on a major label. Fight With Tools, which includes references to the failure of the government to adequately respond to Hurricane Katrina ("Stand Up"), an ode to a Southern woman who stood up for black civil rights in the 1950s and 1960s ("Anne Braden"), and occasional references to the plight of Leonard Peltier, a long-imprisoned American Indian activist who many are convinced was convicted with the use of contrived evidence and coerced witnesses.
Regardless of your personal convictions, however, these guys can flow and, unlike many hip-hop artists, the six-man group play real instruments in a live setting with flair and not a little bit of ability. Strings and brass compliment guitars and drums combining for a full, almost orchestral sound that imparts a delightful bit of elegance to the songs without overpowering the impressive lyrics of the two MCs, Jonny 5 and Brer Rabbit.
"Stand Up" and ride your bike with no "Handlebars" to the Handlebar on May 27th or I will "Punch You in the Face."

Editor's Note: "Punch You in the Face" is not an actual Flobots song so don't yell out for them to play it during the show unless you want the band to look confused.
Posted by Alastair McCandless at 10:25 PM

I loved the title and the clever play on their hit song-the venue was very appropriate for a Flobots pun and you nailed it.

1. Even though you obviously acknowledge it in the title, in the first sentence you need to reference that Flobots will be performing at the Handlebar. It just says "will be performing" as of now.

2. The second suggestion is just a word choice recommendation and you can certainly take or leave it because it's no big deal: When you say "strings and brass added to guitar and drums make for a full, almost orchestral sound," I would suggest as an alternate phrasing, "Strings and brass complement guitar and drums to create a full, almost orchestral sound."

Overall, I think it's a dead on description of the band and their sound. I will certainly do my best to try and make the show.

They were pretty awesome (all two songs) at halftime in Commerce City for the Colorado Rapids opening game. A treat for sure. They played a cover (can't remember) and another song (don't know the name). No handlebars, though :(