Welcome Back to the Diamond 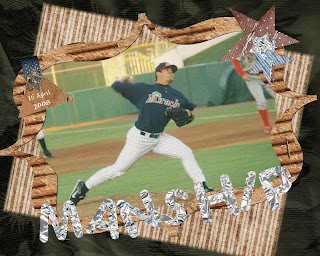 In order to properly roll out the red carpet on the brand new season I thought it might be a good idea to announce this year's Major League Baseball all-name team. If I wait til June the Cubs might be eliminated from contention and I could lose interest. So without further ado:

Catcher: The duo of Jarrod Saltalamacchia (Texas Rangers) and Taylor Teagarden (same). The longest name in the league can't be left off the list. He has to wear two jerseys to completely spell his surname in its entirety. As far as Teagarden, I love the irony of such a large man (the catcher runs 200 lbs. +) running around with such a petit-sounding moniker, which conjures up scenes from "Gosford Park" and "Pride and Prejudice" in my mind.

First Base: Unfortunately Yonder Alonso didn't actually make the Cincinnati Reds Opening Day roster. I have faith, however, that Alonso will put in the work down yonder in AAA and he will be back in the majors soon enough to deserve a spot on the team. We will start long time name team fave Ryan "Donnie" Garko (Cleveland Indians) in his place until that time comes (in your face?).

Second Base: Congratulations to Asdrubal "Assdrool" Cabrera (Cleveland Indians), who has maintained his starting position for the third straight year (and probably until he is forcibly retired due to suckiness - actually he was good last year but I just can't picture a Hall of Fame career from someone named Assdrool).

Shortstop: Brian Bo(w)cock and his bent weiner that shoots arrows also sucked it up a bit too much in the spring and will not be wearing a Phillies uniform. Ryan (TheRapist) TheRiot (Chicago Cubs) will hold down the fort (and hopefully be moved to second with his second basemen arm-having self.

Third Base: Gordon Beckham, Chicago White Sox. No real reason except to give me an excuse to ask a couple survey questions. Who comes off as more of a pansy - Jeff Gordon or David Beckham? Will Gordon Beckham combine their pansy personalities into a super-human freakazoid character about whom several Marvel Comic Book series will be written?

Left Field: Cory Hart (Milwaukee Brewers). He still wears his sunglasses at night - so he can, so he can, see better. His starting job is in jeopardy thanks to Angel Pagan, who, according to redneck troglodyte and ex-major leaguer John Rocker, is the holiest thing in all of godforsaken New York.

Center Field: Milton Bradley (Seattle Mariners) and Coco Crisp (Oakland Athletics). These two actually played together in the early part of their career for the Cleveland Indians. They are platoon in perpetuity here - until Bradley irritates the last few teams who have yet to get rid of him.

Right Field: Fuckudome obviously has his job locked up as long as he can remain on the Chicago Cubs roster. After playing so badly in right field today that even Alfonso Soriano was ashamed, this may be his last year in this spot. Several players named Fucku-something are primed to take his place in the Japanese baseball player quota system.

Pitcher: Toby Stoner (New York Mets). All he needs are some tasty waves, cool buds, and he's fine. Even so, the team will need a couple more arms, so Johnathan Albadalejo (New York Yankees), pronounced "I-am-a-banjo, will fill in from time to time. That illegitimate pitcher from the Philadelphia Phillies, Antonio Bastardo, will throw a few innings as well. Obviously a spot is reserved in the bullpen for Boof Bonser of the Boston Red Sox, who starts the year on the disabled list. Jeff Manship (Minnesota Twins) should be prepared to set sail during the September call-up when rosters expand to 35. "Jerkin The" Merkin Valdez has already shit the bed for the Toronto Blue Jays with an ERA of 27 and been sent to the minor leagues where he will likely perish in ignominy.

So there is your roster. I am always doing research to improve the quality of the side, so all suggestions will be taken under advisement. Enjoy the season while you can - only 20,000 games left to go!
Posted by Alastair McCandless at 10:07 PM

That works as well - I was going for the Fisher-Price angle, but that is why I always solicit a second opinion.