Dry and dusty I started once more for Foresthill.  The omens were ill.  Litter lined the road and trucks with giant tires flew by without acknowledging the possibility of a speed limit.  I had low expectations for what lay ahead, certain Foresthill would be a dud.
I couldn't have been more wrong if I had told you the moon was flat and made of radishes.  I should be in the Wrong Hall of Fame.  The water situation was solved a couple miles before town when I met a nice fellow who filled me up a jug and threw in a Gatorade.
Once in Foresthill I entered the Red Dirt Saloon, where several patrons were already sipping brews a few minutes before eleven.  These seemed like fine upstanding citizens, so I joined them, meeting Matt, John, and Suzanne in quick succession.  I figured we would share a pint and I would go my merry way.  At some point I let slip that I did not necessarily need to reach Auburn that day.  I might as well have thrown a piece of meat at a tiger.
Suddenly I was being bought pints and shots, shooting pool, and observing the decor of old mining and sawmill equipment start to blur.  The bar's surface, constructed of a single sugar pine tree, seemed a likely future resting place for my head. 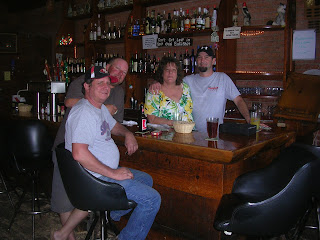 I was saved by John, who took me to his house for a shower.  While I removed a few layers of grime, he called in sick to work so that something as silly as responsibility wouldn't get in the way of further debauchery.  Matt showed up, joined by their friend Andy and a couple of scuba suits.  I was whisked to Sugar Pine Reservoir, where I enjoyed a refreshing dip while the others took turns using the gear.  I didn't dive since I'm not certified.  I like new experiences, but drowning is not one I plan on trying anytime too soon.
Andy's house was the next stop on our tour.  He and his wife Lorette prepared us a spicy and savory meal of fajitas.  I believe there was more beer involved, but memory is a hazy thing after a bout of this magnitude.  Losing forty pounds has had some effect on my body's tolerance of the stuff as well.  Only years of practice allowed me to fool my new friends into thinking I was not a drooling idiot.  Then we went back to the bar.
At the Red Dirt John provided a distraction, a knock down, drag out verbal brawl with his woman, who was displeased at his decision to play hooky.  I tried to help Matt mediate, mostly by not talking.  I did have a rather interesting conversation with an older hippie-type fellow, and if I ever remember the content I'll get back to you.
By one A.M. I waved the white flag and convinced Matt to put me to bed on his sofa, where my eyes closed and snoring commenced.  Tomorrow: The Hangover Part 296,892


Posted by Alastair McCandless at 6:54 PM