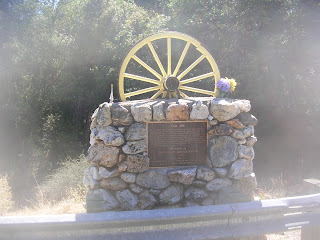 In the morning we all returned to our normal lives.  John went back to work, Matt headed off to the Sacramento airport to retrieve his wife Amy and infant son Everett.  I joined the trail once more, laden with edible goodies courtesy of Matt, Andy, and Lorette.
I walked in a daze, previous events combining with future worries to overwhelm my frazzled mind.  If as Darwin says, only the strong survive, why have my more qualified brain cells fled the scene?  I had a feeling of apprehension, but I could not tell you what I feared.   My surroundings had not felt so surreal since I returned to the Dali grind in April.
An odd monument did little to help.  Aside the Foresthill-Auburn Road lies a grand memorial of stone and brick.  The shrine of a president? An explorer?  A famous religious figure?  No, a great man or woman was not so honored.  A horse was the recipient.  Not Secretariat, Sea Biscuit, or the star of "Black Beauty", but a stagecoach mount, Old Joe, shot and killed during a robbery.
More befuddled than before, I trudged on, wishing for wisdom and clarity to repair my shattered thoughts.  The middle finger of the American River calmed me momentarily, as water of seems to, then abandoned me, disappearing around a bend.
I still had to find refuge before Auburn.  Mom had booked me a rest day there, but not until tomorrow.  The Auburn Recreation Area appeared promising, but the camping sites were far from the highway.  Too many people lurked about to consider the stealth approach.  Finally I came upon an unused dirt path, the shadow of the trees beckoning me to hide underneath their limbs.  I found refuge under one of the largest, within a sea of yellow grass, out of sight, out of mind.  In the morning I hope the cobwebs clear from mine.