I work in the dark corridors, the spaces in between.  Not by choice you see.  the trails take me there and I feel impelled to follow at times, like Gollum searching for the one ring, but with a less disgusting diet and not quite as butt-ugly.
There may have been places of interest in the miles north of Sacramento, but I saw them not.  Brief scraps of the Sacramento State campus, the Cal Expo Center, and an immaculately manicured golf course all flashed around me for seconds before the bikeway hid again behind a wall of shrubbery or headed down an ugly old irrigation canal.
At Discovery Park I emerged once again into open space at the edge of downtown Sacramento.  The city was born in the 49ers stampede to California. Sutter's Mill, where the insanity began, is located a short distance away.  John Sutter's name will be forever associated with the best known bonanza in American history, but the man himself was left trampled underfoot.  The profitable ranch he had worked to build over the previous decade fell apart as his employees left in search of greater riches.  Prospectors arriving in full gold lust rampaged over Sutter's land and destroyed all he had worked for over the last decade. The grist mill where the initial discovery was made ended up being dismantled, the timber used to construct a hotel in Sacramento for the newcomers.
The Sacramento waterfront retains much of its architecture from those early days.  You can sit upon the docks and easily picture a boat unloading the day's fresh catch, a maddened crowd, dreaming of the wealth they would soon enjoy.  The river system flows all the way to San Francisco Bay and out into the Pacific.  A traveler from New York could technically reach Sacramento without ever touching dry land. 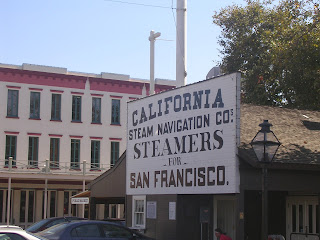 Later transportation and information networks cemented Sacramento's importance to Northern California.  The Pony Express terminated here.  The Transcontinental Railroad was masterminded in part by Theodore Judah, who insured the route traversed the Sierras into Sactown.  The man himself never saw the completion of all he had worked for, dying in 1863, six years before the Golden Spike was driven in Utah.  A museum on the waterfront documents the positive financial impact the railroad had.
Major interstates and an international airport continue the tradition, but today's Sacramento is more than just a hub on the way to the Bay Area.  California is the wealthiest state in the Union and the capital has been situated in Sacramento since 1854.  Richard Nixon, Ronald Reagan, and the Terminator have all occupied the governor's seat at the corner of 9th and Capitol.
Arnold may have been the one to utter, "I'll be back" but California's governors all seem to have a knack for returning from the political dead.  Upon losing the governor's race in 1962 Nixon lamented, "You won't have Dick Nixon to kick around anymore..."  Sadly he was wrong.  Reagan lost the 1976 Republican primary to Gerald Ford before his two landslide victories in the 80s.  Most amazing of all, current governor Jerry Brown led California in the 1970s and early 1980s, then disappeared from sight for fifteen years after a failed presidential campaign, only to reassume the throne in 2011.  The suede denim secret police have returned.
For a second consecutive night I had a host.  Rich Fowler picked me up at four, near the Sacramento Animal Penitentiary.  If the surname sounds familiar, you may recall his brother Ron and his wife Kathy adopted me for a couple of nights in Johnson Lake, Nebraska.
At that time Rich was preparing for a one day, two hundred mile bike ride.  The sixty nine year old completed the task, telling me the turning point came at the one hundred mile mark when he crested the most intimidating slope on the route.  Rich was in a celebratory mood when we met; the Oakland A's had just completed a final series sweep of the Texas Rangers to win the AL West in improbable fashion.  Both Bay Area baseball clubs are in the Playoffs for the first time since 1989.  Be careful what you wish for Rich, I imagine you recall what happened during that World Series.  Hints: Loma Prieta, Andy Richter, Freeway Collapsing Seismic Armageddon.
Later in the evening Rick's wife Cynthia arrived.  She had been an integral part of Rich's exploits as training partner and participant.  They rode across the United States together in 2000 on a tandem bike.
We all sat together and enjoyed a succulent meal of turkey, salad, and fresh vegetables.  While we ate we watched the first presidential debate.  Unbelievably, I was able to keep almost all of my food down.