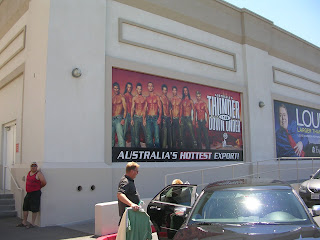 I recently returned from a two day trip to Las Vegas, part of a week long vacation I took out west with some of my friends. Contrary to the title of this article I actually managed to get out of the city with most of my clothing intact. I'm not really much of a gambler so I avoided most of the games. In fact, I don't really even understand what is going on with craps, roulette, baccarat, etc. I did play the slot machines, which were pretty simple. You insert some money, push a button and then watch the wheels spin around and make some noises. Then you repeat this action until all your money is in the machine.
My only other wagering was done at the New York, New York casino sports book where along with my friends I placed a five dollar bet on the under in the Toronto vs San Diego baseball game. The teams took merely three innings to outscore the under and demolish our chances. Fortunately, the bookie had erred and given us a receipt for the Anaheim vs Milwaukee game instead. This game featured more runs than the Cubs have scored all season and was also a loser, if only barely since I think the Cubbies have a total of six for the year.
Not wanting to throw all my hard-earned cash into the wind and watch it blow away to the four corners of the Earth I walked much of the strip along with my buddies, who we will call Corey and Mark for the purposes of this story. I was left in awe of the amazing architecture evident in every direction. I had always thought the Eiffel Tower was in Paris. New York, New York was one of the most impressive hotels, featuring the major landmarks of our nation's largest city thrown up haphazardly as if the planet had swallowed the real city and regurgitated it in the Nevada desert. A roller coaster circled the property in order to bring the atmosphere in line with what Salvador Dali would have wanted.
We stayed at the Excalibur, a cheap knockoff of a thirteenth century castle built to resemble something your little brother constructed at the age of four with his Lego set. On the positive side, there was an In and Out burger nearby so the dude was at least able to abide.
Walking down the Las Vegas strip affords you the opportunity to meet all kinds of interesting people, most of whom are Latinos snapping their fingers in unison like the Sharks in West Side Story while they attempt to pawn off free passes to various strip clubs. One man did offer us a chance to see naked midgets jumping off of diving boards and I do admit we gave serious consideration to his proposal. This is something I do not believe you can see regularly in Greenville yet. Oh well, maybe next time.
My favorite casino was the Venetian, which boasts gondolas floating on a man-made canal within the premises as well as a ceiling painted as if it were the blue sky overhead. Another section of the hotel had elaborate frescoes that were as impressive at first glance as anything you can find in the cathedrals and palaces of Europe.
We also entered the famed Bellagio, where we were able to dine on their buffet, a massive spread which resembled a culinary Noah's ark, with seemingly every type of food from around the world represented. Unlike Noah's tiny skiff, this battleship contained enough food to repopulate several worlds rather than only one. I was reminded that I needed to apologize to Adam Richman for accusing him of glorifying gluttony after I hypocritically partook in three full plates (not to mention Burritozilla, but that is for another time). I vote we give every Haitian who lost his home or business during the recent massive earthquake there a free year long pass to the buffet to help ease my guilt.
Honestly though, as much glitz and glamor as exists all along the strip I had little interest in gambling, visiting strip clubs and prostitutes, or going to the various shows. Even superstars like Wayne Brady, Tom Jones, Celine Dion, Barry Manilow and the Thunder from Down Under can only keep my attention for only a few minutes or so. Well maybe a little longer in the case of the Thunder from Down Under.
Despite the easy availability of all these things, my favorite place was O'Shea's, an Irish bar/casino where we were able to obtain cheap beer and play beer pong. Call me a provincial redneck or an unenlightened slob if you will, but its the simple things that make me happy.
Posted by Alastair McCandless at 10:51 PM