The Name Game: G Thru I Edition 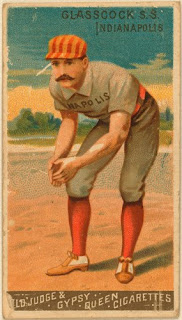 Welcome to our third edition of the name game here at Thoughts Askew, where today we will be looking at the greatest players ever to sport a last name somewhere between Kason Gabbard and Maicer Izturis. Actually, most of these players weren't exactly Hall of Fame fodder, but their names certainly are. You'll notice that although names beginning with the letter "i" were admissible this go around none managed to make the cut. I'd put Pete Incaviglia on here, but he once hit a baseball through the outfield fence so I tread lightly around the man. Much respect, Pete.
This time around we did some voting to get the people involved and to perpetuate the myth that we live in a democracy. Thanks to those who helped narrow down a field heavy with contenders. Presented here is our starting nine and bullpen. Others who received votes will also get a brief mention.

1B: Dick "Doc" Hoblitzell: Besides a steady bedside manner and an encyclopedic knowledge of STD cures, Dick Doc proved a solid major league first baseman, starting nine years for the Reds and Red Sox during the 1910s. Hobliztell even made a great tea out of pine tar that would clear up an ugly case of the clap in no time.
Also receiving votes: Chicken Hawks.

2B: Jack Glasscock: Our weiner-centric theme continues with poor Jack Glasscock, whose successful seventeen year career (1879-1895) was brought to a tragic end in 1895 when his fragile wang finally broke. Even the Dick Doc could do nothing for him.
Also receiving votes: Howdy Groskloss.

SS: Turkey Gross: I'm guessing Thanksgiving is not his favorite holiday. Gross was most likely not a favorite of Red Sox fans either after batting .094 in a short stretch with the team in 1925.
Also receiving votes: Rich Hacker. A perfect descriptive term for many of the power-hitting, strikeout machines of the modern era (Rob Deer I'm looking at you), Rich Hacker struck out in 12 of his 33 professional at bats while managing a stellar .121 batting average.

3B: Dick Hunt: Although often confused with a weekly event at your local gay bar "Kittens," Dick Hunt actually managed a short stay in 1872 with the Brooklyn Eckfords. According to Baseballreference.com, this counts as a viable major league career so fuck it, he's on the squad. By the way, if you've ever wondered if anyone put two and two together and united Dick Cheney and Duck Hunt, wonder no more.

OF: Ducky Hemp: Another bizarre name from the 19th century, Ducky reminds us that hemp can be made into many fine legal products. If you want to get involved in anything illegal please see a certain member of the team's pitching staff.

OF: Bill Goodenough: Dicks and 19th century players seem to be the theme of this particular roster and although Bill does not fit the schlong bill, he was Goodenough to play for the 1893 St. Louis Browns and gosh darn it, people like him.

OF: Drungo Hazewood: Drungo only pawn in game of life. Believe it or not, Hazewood's given name really was Drungo. What that means in American I can't be sure, but rumor has it that Drungo is another word for idiot in Australian slang. Let's just give his family the benefit of the doubt and assume they were unaware of that fact. Hazewood's baseball skills, or lack thereof, seem to indicate he was a bit of an idiot at the plate, or at the very least unable to hit a curveball, slider, fastball, changeup, etc. Drungo had five plate appearances for the 1980 Baltimore Orioles and managed to avoid striking out on only one of those occasions.
Also receiving votes: Nick Goulish, Dummy Hoy (he was deaf, boy they were sensitive folks in the 19th century), Bug Holliday, Willie Horton (follow the link if you're too young to know why his name might be considered funny), and Dick Hall (to think, we could have had even more Dicks on this team)

C: Bubbles Hargrave: Not exactly a manly appellation for someone in such a macho vocation, but the decade of the 1920s Hargrave spent with the Reds was a different era. Apparently the strange nicknames ran in the family - Bubbles' brother was known as Pinky. I'm kind of surprised they never got their own television show. Who wouldn't watch the "Pinky and Bubbles Hour?" Oh wait, television hadn't been invented yet, never mind.
Also receiving votes: Johnny Gooch - my personal favorite (that's what I get for listening to the masses), Gooch just sounds like the edgy friend of every teenage character in 1980s comedy. It seems only yesterday that Mike Seaver was hanging out with Boner and the Gooch on "Growing Pains." Also, according to urbandictionary.com gooch is a synonym for grundle. Case closed.

P: Buck Hooker: Who doesn't like a cheap whore? Apparently the Cincinnati Reds, who only gave Buck a couple of appearances just after the turn of the 20th century. The going rate at the time was only 50 cents - oh to think of those bygone days when a buck really did go a long way. To think that once you could get a hooker. Nowadays all you can do is feed a starving child in Africa. Hard times.

P: Dick Hyde: We've all been there - Momma is angry, time to go into hibernation. Seriously though, now we know who Dick Hunt was searching for all this time. Reminds me of the old Robert Louis Stevenson story Dick and Hyde, where Hyde, a pitcher for the Nationals during the 1950s, would blame Dick every time he got into trouble.

P: Herb Hash: Your source for a variety of illegal narcotics, Hash served with the Red Sox from 1940 to 1941. Life wasn't all roses for Herb afterward as he was stalked by drug sniffing dogs and spent much of his life fulfilling his high school superlative, "most likely to be stopped by airport security." Thankfully, Jihad Muhammad came along in 2005 to take the heat off of Hash. He wasn't able to enjoy his new-found freedom to travel for long though, dying when his meth lab exploded in 2008.

P: Ed Head: Only Dick Head or Mike Hunt would have made a more appropriate closer to the G-I team, but since neither never rose above the minor leagues or even existed for all I know, we'll have to settle for the poetic Ed Head. Our latest source for sexual entendres won twenty seven games pitching for the Brooklyn Dodgers during World War II.
Also received votes: Russ Heman, Pretzels Getzen, Noodles Hahn, Chief Hogsett, Jimmy Gobble, and Val Kilmer's favorite, Ed Huckleberry.
Posted by Alastair McCandless at 10:01 PM

Glasscock is my fave although friends of mine prefer Herb Hash ;)

Don't forget Mike Seaver's best friend boner bud! Belongs right there with this team of Dicks. Loved the Dick Cheney duck hunt game, that is fucking hilarious. 'You failed to kill Osama, you win four more years!' It's funny (and uber depressing) because it's true.

Damn it, I meant Boner. Was booger in "Revenge of the Nerds?" You see what I mean about that era of comedic entertainment blurring together.
Once I've posted all these lists I will do a master team with only the best of the best making the final cut.

Yeah Booger was in 'Revenge of the Nerds,'bud. Another classic from the 80s.

Really funny, dude! Couldn't help sneaking a look at Longoria on the way. Flesh is weak.