Arenal: Joe vs. the Invisible Volcano 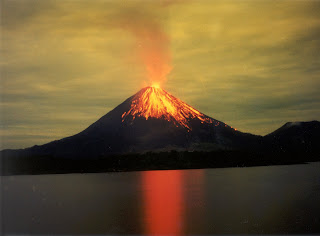 Arenal* volcano allegedly sits adjacent to the Arenal* river and Arenal* Lake, a man-made reservoir formed as part of a hydroelectric project in 1979. I say allegedly because despite the fact that I spent two days with my family at the Arenal* Paraiso Hotel, none of us ever spotted the elusive volcano.
*Costa Rican law states that all landforms and places within a fifty square mile radius of the volcano include the word Arenal in their title*
For much of the year, including the entirety of our visit, Arenal Volcano lies shrouded by mystery, reticent to show off its figure to the adoring masses. Clouds surround the peak, which stretches to the height of 5,358 feet, even when the rest of the sky is clear.
Things could have been worse I suppose. The volcano is still very active - an eruption on my birthday in 1968 presaged my ominous coming and also killed 87 people. Trees had grown inside the crater and the locals believed the mountain was dormant. Whoops!
The only warning Arenal gave came when the local streams began to heat, forming hot springs at an area called Tabacon that is still popular with visitors today as a natural jacuzzi. The town of Tabacon was destroyed in the 1968 eruption and many of the residents killed, but there are always trade-offs in the search for tourist dollars.
Arenal, the youngest of the Earth's Costa Rican vents, is still quite active today. I may not have seen the peak, but at least my family and I managed to avoid toxic gases, super-hot magma, and huge rocks falling from the sky. Word is none of those things make for a great vacation unless Chevy Chase is involved.
All of these disasters seemed possible when we took a hike in the area beneath the volcano's shadow on our second day. During the stroll we passed signs warning us that we went farther at our own risk. Sad that I had forgotten the volcano-appeasing virgin I always carry on such occasions, I vowed to run as fast as I could as soon as the mountain began to rumble. Fortunately, my plan never came into play, as statistics show fat ass out-of-shape people usually fail to place in a foot race with lava, gas, and ash.
The only injury occurred when my mother stumbled, suffering a minor laceration to her hand. She may have been distracted by the beauty of the lava fields, where, a mile or more from the volcano's base, we could walk amongst a symbol of the Earth's immense power. The pile of rocks upon which we trod told us all we needed to know about Arenal's impressive throwing arm. Clearly the volcano would be a number one draft pick if not for signability questions and the fact that its passes would burn off the arms of even the most sure-handed receiver.
The abundance and diversity of Costa Rican wild life also continued to amaze us on our hike, as we spotted an eyelash pit viper, two great curassows, a crested guan, and a bevy of olive-throated parakeets.
I guess that's the moral of the story of my Costa Rican vacation. I may never have seen the top of Arenal, but as I learned, the riches of Costa Rica don't ever disappoint you for too long. If you aren't able to see one thing, just keep on moving or better yet, sit still and pay close attention - never doubt that there will be something incredible and unexpected waiting for you there. At the very least you can get a volcano burrito at the Taco Bell in San Jose or a Mount Arenal Volcano dessert at the Paraiso restaurant. Personally, I bought a refrigerator magnet so I could see what the goddamn thing looked like.
Posted by Alastair McCandless at 10:25 PM

And don't forget the Arenal Volcano dessert, an explosion of flavor smothering your taste buds in chocolate cookie, ice cream and fudge sauce!
I came away with the same feeling about Arenal though in all seriousness. Even though it was surely disappointing to never see the actual volcano which was the main attraction, the wildlife we observed on the way to and from the lava fields and the beautiful views from the lava fields themselves more than made up for it.
Good historical information provided on Arenal. The only detail you might want to check is the village that was destroyed in the 1968 eruption. When I was skimming the Arenal book in the Paraiso gift shop, I seem to recall the town closest to Arenal having a different name. Maybe I am remembering that incorrectly, but for some reason that stood out in my mind.
If you want to throw in another interesting factoid, Paulo also told us that Arenal is the most active volcano in Central America. There are also 10 volcanoes in Costa Rica, 5 active and Ticos use geothermal heat from volcanoes to generate power. Just some extra nerdiness to add from my meticulous scribblings if you so choose to incorporate them.

ive checked this cool site a few times now and i have to say that i find it quite exeptional actually. itll be nice to read more in the future! :p

Hrmm that was weird, my comment got eaten. Anyway I wanted to say that its nice to know that someone else also mentioned this as I had trouble finding the same info elsewhere. This was the first place that told me the answer. Thanks.