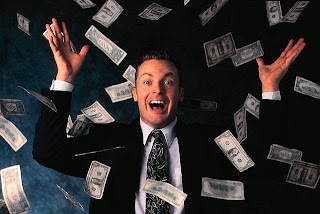 Conservatives, since they are usually devoid of any ideas of their own outside of cutting taxes, tend to deride most efforts by Progressives to solve problems as "throwing money at the problem." I have tried for years to become a problem myself so that people would throw money at me, but so far to no avail.
There is one issue in South Carolina politics where I feel the tossing of a few thousand Benjamins would be an integral part of the solution (yes only part, but enough to get people jumping up and down in defiant anger). I speak of the realm of education, where there are two linked problems that could be solved with an influx of green: low teacher quality and crowded classrooms.
First year teachers are paid a salary of 28,000 dollars a year (varies slightly from county to county, sometimes from district to district) with the possibility of earning more if you gain national accreditation, a masters degree, or a PHD. Lawyers and doctors routinely earn six figures a year. Where do you think talented people tend to go? Sure as hell not the barely able to feed yourself, much less your family salary, not if they have a choice in the matter.
Only the crusader type of person, who believes above all in the value of education would chose the field of primary education over one where they could make actual money. Outside of these holy warriors you get people who just need a job and go through the motions, doing enough just to not get fired.
There are, fortunately some great teachers nonetheless and many of us even in South Carolina were blessed to sit in their classrooms. I can think of a few myself, but there just aren't enough and they exist at an even lower rate in the poorer rural areas of the state (like the Corridor of Shame) where the low salary is combined with lousy working conditions and the exciting nightlife that goes along with living in places like Jasper County.
A fairer wage would draw more applicants and allow for a higher caliber of teacher, lowering classrooms sizes and giving the children of South Carolina a much greater chance to succeed. Study after study has shown the import the correlation between individual attention and student success.
So rear back and start throwing those dollar dollar bills ya'll. I think we owe it to our young people not to short change them - I can think of a lot worse things for my taxes to be spent upon.

In honor of Drs. Amy and Peter McCandless, my parents, who have over 70 combined years of experience in the field of education. I love you Mom and Dad!
Posted by Alastair McCandless at 10:42 PM

Some day I'd like to be in the same boat as your parents.

Well its going to take awhile to gain seventy years of experience for ya bud, but I already love you if that will do for now ;)
You are going to be great, just keep learning a little bit every day.