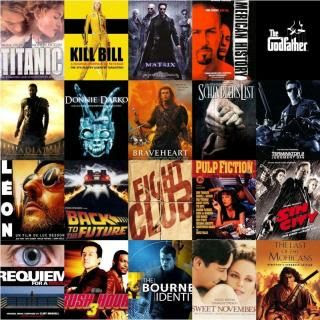 As a self-proclaimed lover of music, its probably not surprising to hear that I also tend to prefer Hollywood productions that come with an excellent accompanying score or soundtrack. Therefore, in the spirit of the list-maker in "High Fidelity" I thought to record for posterity a few of my favorite flicks based on the ability of the music contained within them to lift the quality of the on-screen action. Ironically, "High Fidelity" does not actually make my squad. Nick Hornsby would probably also be disappointed that I was unable to limit my choices to a mere five. Hopefully you will indulge me.
So what is the criteria? I tried to only use one movie per director or musician. I chose to highlight the director in cases when soundtracks are involved and the composer when the music is more of a classical score. Don't look for "Sound of Music" or "West Side Story" here. Since pretty much all musicals stink like the rancid sulfur of Hades, none were able to make the cut.

Did this ass hole make any glaring omissions? Please contact the author at the comments section below to rip him a new one for his ignorance.
Posted by Alastair McCandless at 10:01 PM

An excellent list bro and I agree with most every choice. As I told you before, I know it goes against your rules for selections, but I would still have included the 'Singles' soundtrack as one of my top choices even though the movie itself was pretty terrible. It's such an era-defining soundtrack for me that the feelings of nostalgia it evokes trump the sub-par movie in which it finds itself. I also think "The Last of the Mohicans" deserves a top spot and not an honorable mention. That soundtrack complements that movie so well, fits seamlessly into the action and perfectly parallels the roller coaster of emotions the main characters go through.
Also, even though there is not much variation in the music, I think in the horror movie genre the music of John Carpenter's "Halloween," merits an honorable mention. That eerie piano playing enhances and heightens the suspenseful scenes in the movie and complements the "psycho on a murderous rampage," theme so well.

On a side note your line "every song seems as fresh and new as a Summer's Eve douche when placed in the context of "Almost Famous'" metaphorical vagina" had me in stitches. Very clever bro.

The Last of the Mohicans thing was a bit of a cop out on my part I'll admit. It belongs, and probably ahead of a couple of the choices, but I just didn't have a good feel for what to write about it at the time. The Halloween thing is great, but the lack of variation you mention keeps it from these great heights - sticking with horror movies, the Exorcist theme, "Tubular Bells" is also fantastic. As far as Singles, if I had done two for a director I would have given Singles that spot for sure.

Great entry sir. As a hardcore Tarantino fan I had a hell of a time deciding on my favorite QT film soundtrack. When the dust settled Pulp Fiction still came out on top, but ever so slightly over the mostly forgotten Jackie Brown.

It was the use of 'Son of a Preacher Man' than made the final difference, but I'd have to say as a whole, Jackie Brown's tunes pack one tight, funky punch and fit the look and feel of the film better than any other of his soundtracks. While it certainly helps to have lead actors who were in their heyday when a lot of the songs were released, I can't see Pam Grier strutting around to anything other than tunes like Bobby Womack's 'Across 110th Street' or Randy Crawford's 'Street Life'. And what's really cool is how everything from the music to the talent screams 1970's, the film seamlessly exists in a modern time.

It also probably helps that I am a huge fan of funk, soul and early R&B (probably from growing up in Motown). A sweet bassline instantly draws me in, and JB features some groovy low-end rumbles like The Brothers Johnson's 'Strawberry Letter 23'. There is also the reoccuring 'Didn't I (Blow Your Mind this Time)' by The Delfonics that perfectly compliments Pam Grier's staggering physical hold over Robert Forster. We're also treated to some Bill Withers, Kansas City's Bloodstone and even Pam Grier herself. Definitely not for everyone, but pretty special in itself.

I don't know if it really defined a generation like the Singles soundtrack did, but The Crow soundtrack has been something I've owned since my early teens and something I still listen to very much. It's accessible enough for the casual alt rock/industrial/metal fan (The Cure, Violent Femmes, STP, NIN, Pantera), but also provides some nice cuts for those seeking to dig deeper into that type of music (Machines of Loving Grace, Helmet, Jesus & Mary Chain, Thrill Kill Kult). And who can forget Rage's DARKNESS?

Oh, and Ennio's 'The Ecstasy of Gold' may be my favorite piece of movie music ever.

Great argument for Jackie Brown, Kevin. I would have to say I'm not in your league as a Motown fan, but I do love 110th Street for sure and your right, as usual with QT, the music is perfectly appropriate to every scene. I can't believe I forgot the Crow Soundtrack, I'll stick that in with the HMs.

I agree with Colin about "Mohicans." I would definitely add "Lawrence of Arabia" to the list, which shows my age, I guess. I was enthralled by that at age 16. But maybe not. You list the Graduate, which is almost as old, and deserves to be in the top group. So does "Brother" for sure.The latter was the first soundtrack I bought since Lawrence I think, though I have S&G cds and Clannad's with Mohican theme on it.

I have never seen "Brother" and have seen only bits and pieces of "Lawrence of Arabia." Thanks for the advice Mustapha, I will check those out, age doesn't matter, only quality.

Did you just state that LL Cool J performed Jungle Boogie on the Pulp Fiction soundtrack???

Jungle Boogie is a Kool and the Gang joint!!

Wise choices. I concur with Almost famous. A recent viewing made me feel like I should have done journalism. John WIlliams is the man. Besides my personal fave (Star Wars), I still remember the first time I saw Jurassic Park and the music that came along with it. Nothing like revealing a Brachiosaur to a beautiful ballad.
Another soundtrack I like is "Donnie Darko". Nothing like "Mad World" as the various characters are revisited in their moments of weakness.

Great choice with "Donnie Darko" that one came to mind the other day when I heard "Under the Milky Way," another great track from that under-appreciated movie.