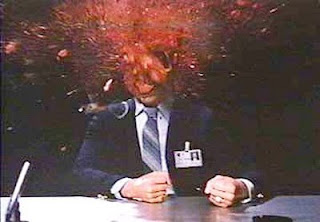 The body count has continued to rise today in South Carolina as the deadly primary race between Carol Campbell III, Paul Thurmond, and seven other irrelevant candidates rages onward into the night.
Reports vary, but so far between 200 and 300 lifeless bodies have been pulled out of voting machines throughout SC District One, where the election is taking place. Ambulances have also been in constant use carrying survivors suffering from embolisms, strokes, and cardiac arrest.
"We have found several voters whose heads have literally exploded - the carnage is gruesome beyond measure," stated Charleston county coroner Jack Trevanian.
The cause of these grisly scenes is still being debated, but prominent sociologist and Coastal Carolina professor Peter Wellington-Brown believes he knows the root cause of the mayhem.
According to Wellington-Brown, "South Carolinians are used to having one household name to pick during an election - say a Thurmond or a Hollings, a Campbell, or even until recently a Ravenel. When faced without one of these names they tend to just pull the "All Republican" lever and walk out, job done."
The problem in this case, Wellington-Brown argues, is that the primary involves only Republicans and has two names nearly everyone recognizes. When faced with choosing between the Campbell and Thurmond dynasties, the brains of many voters have gone on lock down, leading to the catastrophic events.
Awendaw's Ellis Walter agrees with the professor's assessment. "I got into the booth and when I saw the two names I reckon I just started sweating and shaking uncontrollably - I just pushed a random button and got the hell out of there before it was too late."
A 1991 survey, wherein 78% of South Carolinians admitted to being unaware that long-time Senator Ernest Fritz Hollings was a Democrat, also seems to back up Welllington-Brown's theory.
There have been occasional fatalities in the past due to confusion over who to vote for in water commissioner and agricultural secretary races where there is no party affiliation, but a battle between two heavyweight brands for a major state office is a first in recent South Carolina history. Also, the aforementioned positions are viewed as being so astoundingly boring that they draw little interest from the electorate.
Long-time U.S. Congressman Henry Brown vacated the seat earlier this year, creating a vacuum filled by the two serious candidates, as well as several other random people no one has ever heard of before.
Governor Sanford is staying strong amidst the chaos and is encouraging citizens to continue to participate in the democratic process. Sanford is also staunchly defending the state, which he believes has been unfairly targeted by mass media in the past. "The dynasty is a deeply-rooted tradition in American politics," Sanford argued, "just look at the Bush, Clinton, and Kennedy families. Clearly there are idiots all over the country who make these hugely important decisions based on names rather than policies."

For similar insanity check out the Discust.com
Posted by Alastair McCandless at 2:44 PM