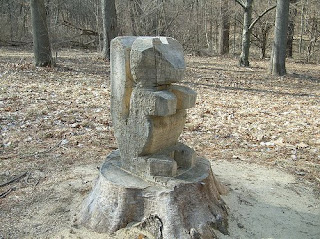 You may have read here, there, or maybe somewhere else about the idea that each and every one of us has an animal totem, a kind of spiritual figure analogous to our persona. Most folks are bears or tigers, lions or cuddly kitty cats. Hopefully none of you out there are skunks, dingos, wolves or some other filthy, lying, stench-ridden beast.
What am I? Methinks in my heart I am a squirrel. I know, it seems like being a rather large man I should be something big and powerful like a lion or an elephant. The sloth might fit my persona on certain days when my movement is limited by hangover or more often, lack of motivation.
The squirrel is the one regardless of how little sense the choice may make on the surface. I have seen him as my brother in the animal kingdom since the day I walked through Cleveland Park and saw one running up-and-down and side-to-side on a tree adjacent to my path that day. He was spending time enjoying the world around him. None of his movements appeared to have any purpose as he scurried upon the tree, pausing with his tail straight up while his head faced the ground, perhaps just enjoying the blood flow to his minuscule noggin.
After disembarking from his pine, the squirrel hopped down the path - despite many different options he chose to stay on the six inch high rock wall that lined the flora planted in that part of the park. I was reminded of how as a child - and sometimes even as an adult - I would walk on a wall high above my companions just because I though it was more exciting or interesting than walking on the sidewalk. Here we get to the nitty gritty if you haven't figured out where I am headed. I've never cared to take the well-trodden path, the road less taken is usually the one I prefer and, like the squirrel on the tree, I prefer to have fun rather than obsess and stress myself out over "responsibilities" or the need to climb the working world pyramid. Don't view what a say as a value judgment on the choices you have made - my point is that each of us is different and should follow his or her own heart to become the person they are, not the person others want them to be.
Posted by Alastair McCandless at 11:04 PM

Very clever.. I like your approach. I fathom myself as a shark. Sneaky, invisible... until it bites. I like staying out of people's way until, somehow, I become relevant.

I hope you never bite me then.

I think you're safe as a land-dwelling mammal.