We Have Nothing to Beer Except Beer Itself 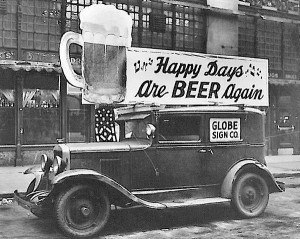 Earlier today, while exercising on a fake bicycle, I began thinking back upon one of the saddest days of my life.   I had just entered Ohio on my cross country hike, and was excited about the prospect of having a beer or two to celebrate the completion of West Virginia.  The town of Belpre did not boast many choices, so I made my way to the local Pizza Hut.  To my shock and horror they did not serve beer.  In fact, the entire county was dry.
The scars from this discovery have yet to heal.  I have racked my brain since to solve the problem, which is bigger than mere local prohibition of alcohol.  Despite evolving a great deal since Gwynzoggg invented fire and Boltroggg used it to burn down the Great Artrusian Forest in 25078 BC, mankind has not learned impulse control.  As a result society has been forced to come up with half measures, laws which attempt to govern our use of alcohol, fire arms, drugs, and other useful items.
I admit, even from a personal perspective, it is very hard to perceive someone's ability to act responsibly.  As a twenty year old I had no idea how to properly ingest alcohol.  I'd use a bowl, funnel, can, bottle, syringe, or any other object near at hand to introduce the liquid to my liver as quickly and efficiently as possible, with no regard for the amount of consumption beside what my body chose to reject.  The next day I would usually feel horrible, questioning the sanity of such mass consumption.  Amnesia would thankfully offset feelings of regret and another binge was soon underway.
Or so I thought in those days.  I now know as a responsible adult that drinking should be properly regulated.  My youthful indiscretions are regretful, and I was lucky to survive this period of my life without following in the footsteps of the great artist and alcoholic Edgard Allen Poe, who finished up his final session by passing out in a gutter dead.
Should someone have stopped me?  Maybe, but I sure would have a lot less funny stories to tell.  I am not an angry drunk and no one was ever hurt physically by my actions while intoxicated.  I did, however, occasionally operate a motor vehicle when I shouldn't have.
Blanket bans or prohibition is unfair, we end up punishing everyone for the sins of a few.  Properly separating the wheat from the chaff is the real issue if we are to make sensible policy.  How can we possibly decide who is well-suited to hit the bottle or the bong?  I think the driving test is a good model. After a period of training, an exam would be administered, one designed to weigh your knowledge and gauge your responses to certain situations.  A panel of five experts would rule as to whether you are capable of enjoying the pleasures of drugs and alcohol or various levels of lethal weaponry safely.  If successful these panels might expand their role.  Don't we all know someone who probably shouldn't be allowed to procreate?  I know this sounds like more government interference in our lives, but once we have passed the exam we will be allowed to defile ourselves in peace forever.  Who doesn't want that?
Posted by Alastair McCandless at 5:46 PM

It seems that you are still bitter over your no beer heartbreak. It is a tragic story for sure.
But, don't take your pain out on the masses with panels and tests.
If prohibition has taught us nothing, it's that people will find away to do what they want...including,drink beer through funnel.
I do, however, fully support a procreation panel.