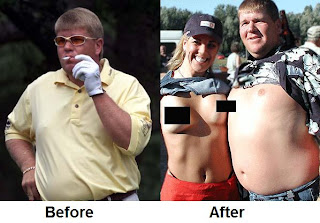 Newsflash: Pebble Beach golf course, just outside of Monterey, California is not a terrible place. A natural beauty carved by God and turned into a golf course by man, there are few more scenic places in the United States. In fact, during my visit I pronounced it positively tolerable. The US Open was played at the site this year and I decided to go, along with some friends I bought in college when I joined Pi Kappa Phi Fraternity. For some reason they seem to still like me ten years later. Maybe I should start reading the fine print on these contracts.
We decided to grace the tournament with our presence on Friday, the second day of the four day event. Friday is also the last day before the cut, the halfway point in the tournament when the worst players amongst the field are removed by grisly methods I shall not delve into now for fear of frightening my younger readers.
As a result, a group of 200 players were still involved in play when we entered the course via the 18th hole around ten in the morning. We were a little late arriving as we had stayed at the house to finish seeing the USA soccer team get raped by a referee from Mali while playing Slovenia. It truly is the worlds' game. Who the fuck knows where any of these places are?
Anyway, back to our story - as we arrived a massive group was brewing around the fairway. One of my friends remarked that the course must have a million people on if all the holes were so crowded. Having noticed that the threesome on the green had a following consisting merely of friends and family, I suggested that we had stumbled upon Tiger Woods and his posse.
Wanting to get a shot at the man who has been such a great player and the center of tremendous controversy of late, we blended into the mob. Despite my height, though, the 36,000 people in my way prevented any sight of the ballyhooed Woods. Also, the dastardly security guards had taken the blow up doll I had brought to present Tiger so that he would get in less dutch with the wife. Foiled in our efforts, we moved on to check out the other holes.
Nestled on a bay on the rocky Northern California coast, Pebble Beach is blessed to contain some of the most dramatic holes in golf. In order to prepare for the tournament, many of the fairways have been moved to the land's edge - which means a several hundred foot fall for any golf ball that gets too close. One hole boasts a second shot taken while staring a hundred foot high cliff right in the face. Let me recommend using a club with some loft for that one.
Our favorite hole was the 7th, the shortest par three in professional golf, just one hundred yards long. Even grandma can reach that green in one shot. But not Charles Barkley - have you ever seen that guy try to hit a golf ball?
Where the hell was I? Oh yeah, talking about attention deficit disorder and writing and about how they are a bad mix. Or maybe the US Open at Pebble Beach, yeah that's it. We sat in the grandstand at the seventh hole for about an hour and enjoyed the cool breezes as several groups of golfers went through.
The weather at Pebble Beach and the surrounding area was a godsend after experiencing the first few weeks of a South Carolina summer. Temperatures varied from 50-70 degrees depending on how close you were to the water and whether the sun decided to make an appearance. I wasn't at all surprised that an Irishman won, as I remarked several times how similar the place felt to the coast of Ireland or the United Kingdom.
The rest of the day we spent wandering from hole to hole, spending a little time at each so that we could watch the great Ian Poulter show off his talents. Poulter is known mainly for his flashy pants, usually displaying a colorful plaid pattern that should have been abandoned along with the rest of 1970s fashion when the apple fell on December 31, 1979. No matter what hole we visited, Poulter's group was playing there. I suggested we adopt the name "Poultergiests" and start a fan club. For some reason everyone thought that idea was idiotic.
Sadly, I have no pictures of the day since camera and cell phone use is banned on the premises during the tournament for those without media credentials (You should have hooked me up Colin). Instead, you will just have to stare at some stock footage of John Daly's gut. He didn't play there, but he was hanging out at the Hooter's down the road. Hey, natural beauty is all in the eye of the beholder, isn't it?

P.S.: Seriously though, here are some pictures for those interested in seeing what I have failed to properly describe.
Posted by Alastair McCandless at 10:56 PM