Fireworks and Foreskins: The Sounds of Istanbul 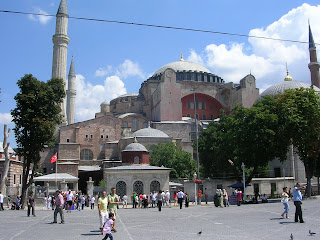 Apparently, size does matter. Istanbul, Turkey is currently listed as the third largest city in the world and having recently returned from a trip there to see my father, his Turkish wife Nalan, and her son/my stepbrother Coskucan any doubt I had in the accuracy of my Rand-McNally Atlas has been swept away. No place I have visited in the United States, even New York, can measure up to the immense population (three times larger than Chicago!) residing there or the sheer geographic extent of the city. One day during my visit we drove fifty minutes of mostly highway driving, and were still seemingly nowhere near the outskirts of the monstrous metropolis.
There is more to the city of Istanbul than idle comparisons to Ron Jeremy. Sitting with one foot in Europe and another in Asia, Istanbul boasts a unique culture combining exotic and ancient aspects of the Orient with many of the modern values of Europe. From the moment of landing at Ataturk International Airport, I was overwhelmed by sensory input.
All of your senses are required to appreciate the foreign masses and structures before you. So many things to see, touch, smell, and taste. You need to use all of these (and perhaps ESP as well to avoid getting hit by a taxi) and I encourage you to do so if you ever find yourselves in Istanbul.
In my opinion, however, the best way to experience the place is through your ears. So take a Q-tip and clean out the wax from your aural canal, sit back, and listen to the city talk. Soon you will hear the pieces fall into place and you may unravel its unusual mysteries.

One of the most unusual sounds to strike my Western ears was the call of the muezzin. Suddenly gone were the church bells of my Southern youth, replaced by his hypnotic chanting voice. The main religion of Turkey is Islam and the muezzin reminds everyone of that fact five times a day, when he calls devout Muslims to prayer over a PA system and subsequently sings selected verses from the Koran.
Mosques dominate the skyline of Istanbul, which according to They Might Be Giants, was once known as Constantinople (the song, which is actually a cover of a tune from the 1950s, fails to mention that before the reign of emperor Constantine the city was called Byzantium). The typical mosque is designed in an architectural style that would have given Sigmund Freud enough material for a new book. The structure's domes are shaped like breasts with a small nipple-like steeple protruding from the center. Rising above the domes are minarets (usually there are four except in the case of Istanbul's famous Blue Mosque which has six) whose phallic towers seem to symbolize the male sex organ and therefore the dominance of man over woman in Islamic culture.
Don't be fooled though, as prevalent as the mosques are Istanbul is a very cosmopolitan city. Many of my Turkish relatives and their friends are either Atheists or lapsed Muslims. The fundamentalism many Americans associate with Islam was completely absent in my experiences there. Alcohol was legal and enjoyed by nearly everyone I encountered. Fun fact: my stepbrother Coskucan kindly informed me that the first motion pictures produced in Turkey were porno flicks.

Give Em the Horn

The sounds of honking fills the ears when moving around Istanbul. Cars, taxis, buses, and pedestrians fill the streets of the city and fight for each meter of available space. The traffic moves in a seemingly chaotic pattern and streets created long before the existence of automobiles meander up and down the hills of the town, which are often as steep as those in San Francisco.
Don't rent a car here without first making sure the brakes are in perfect condition. If you have a heart condition or drive defensively just take a taxi or the train. Actually, if you have a heart condition taking the taxi is not for you either as the drivers bob and weave in and out of the lanes like the young butterfly Cassius Clay deftly avoiding the punches of Sonny Liston. The driver's left hand is constantly on the horn and he uses it without any remorse against any other vehicles or pedestrians who dare intrude into his path. Pedestrians better be aware of where they are at all times during their real life game of Frogger or else they will quickly become like the star of the song by the great band Cattle Decapitation - a "Pedeadstrian."

Fireworks Exploding in the Night

My first night in town happened to fall on my birthday and my Turkish family was kind enough to take me out on a private cruise of the Bosporus, the waterway that divides European Istanbul from Asian Istanbul. As we floated around in the night, I couldn't help but notice the recurring sound and sight of fireworks in the night sky. Had I landed on Turkish Independence Day or perhaps some obscure Muslim holiday of which I was not aware? Were these explosions just the local version of rednecks having a good time? Not at all. In fact, I shortly learned that something more sinister was going on - little boys were losing part of their penis.
When a lad reaches the age of nine in Turkey the time has come to face the foreskin executioner's blade. The rite of circumcision is somewhat similar to a Bar Mitzvah. Like that Jewish ceremony but with more penis chopping, circumcision is treated as a coming of age ritual in which the child is dressed up in a uniform similar to your high school marching band's and piled with presents and attention to make up for the fact that he is about to say goodbye to his foreskin for the final time. Originally the ritual was linked with Islam, but nowadays it has become more of a cultural thing. My stepbrother, who was not raised as a Muslim, winced as he told me he had also undergone the ordeal. The fireworks acknowledge that the deed is done and the boy has moved on to the next stage of manhood.
I want to use this space to personally thank my parents for having this procedure done on me when I was too young to realize what was happening.

The pussies that used to congregate in the harems of Topkapi Palace now roam the streets in gangs. Purring, meowing, and screeching their way through the city, cats own the back alleys of Istanbul. Existing in numbers that almost boggle the mind, felines are an ubiquitous sight as you wander from shop to shop. The section of the town where my family resides is nicknamed "The Republic of Cats." So densely packed are they in the area that fights over territory or ladies are bound to occur and I was wakened from sleep on multiple occasions by the screeching of their battles.

The Siren's Call of the Carpet Merchant

Finally, a warning for other Americans set to visit Istanbul. You may have left the land of Wall Street behind, but capitalism is alive and well in Turkey. If you doubt my word, merely walk around the tourist district in the vicinity of the Hagia Sophia and the Blue Mosque for a couple of hours while wearing your "I am a Tourist!" uniform (don't forget the camera). Plan on being accosted several times by the men my brother has so accurately referred to as the used car salesmen of Turkey - the carpet merchants.
These fellows all have a relative from the United States they will be glad to tell you about as they show you to their store, where they have very fine merchandise and a special price just for you. Follow along and you will see. Who knows, perhaps you will find a carpet that really ties the room together.
Are these salesman roaming the tourist district searching for naive prey to plunder or aggressive but fair businessmen doing their utmost to bring in customers? Probably the honesty of the individual may vary as in most businesses, but I chose to avoid finding out since my rug remains unmiturated upon.

Of all the sounds that I recall from my time in Istanbul the one that will stay with me longest is laughter. I will forever remember the friendliness of my Turkish relatives, some of whom I was meeting for the very first time, as well as my immediate acceptance among their friends. Their smiles and laughs will linger long after my memories of the mosques and palaces I visited fade away in the distances of my mind.

Next month: Turkish cuisine and booze
Posted by Alastair McCandless at 10:48 AM