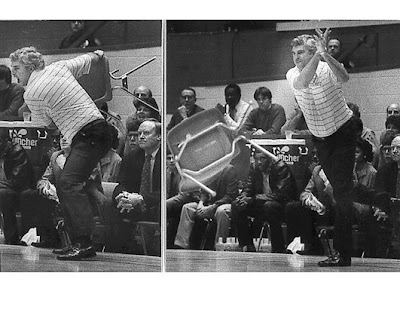 Today the world of sports was hit with a crushing blow to the jaw as Coach Bobby Knight has finally decided to call it quits after over thirty years coaching college basketball.
"I just fucking felt like there was not a goddamn thing left for me to accomplish in this fucking game anymore cocksucker. I am sixty-seven years old for fucks sake. I am getting too goddamned old for this shit," the coach stated in his retirement news conference.
Knight had reached some impressive milestones this year, spent coaching at Texas Tech University in Lubbock, Texas. He won his 900th game, cursed out his 20000th ref, beat up his 150th player (for his own team), and got into his 9000th confrontation with some random guy at virtually any place he goes. There truly is very little left for the man known as "The General" to do in the realm of basketball. He has even been fired once in his career. God knows the man who let Knight go was hiding in Hitler's bunker at the time of the announcement.
When asked what he planned to do during his retirement, the always lovable Coach Knight snarled,"Practice firing my fucking rifle at pictures of you ass holes so I don't have to come to your house and fuck you up in person."
Knight's son Pat will be taking over the team for the remainder of the season and the foreseeable future. When asked if he planned to conduct things differently than his celebrated father, Pat remarked,"Fuck no cocksucker, get the fuck out of my face you human filth, I got a goddamned practice to run here.
Posted by Alastair McCandless at 10:58 PM

Earlier this year Bob Knight brought out a two-year-old kid to his press conference that I guess was his grandson or something and he sat there and cussed like a sailor in front of the kid.

I'm glad that he has always emphasized education and pushed his kids in the classroom, but aside from this he just seems like a genuine asshole. As someone who works in the media, if I were a sports writer down in Lubbock I would probably be fucking relieved to see him go. He has always seemed to relish being a prick and making people feel uncomfortable. As far as I'm concerned he can 'suck it Trebek.'

I sense a future in coaching for his grandson.